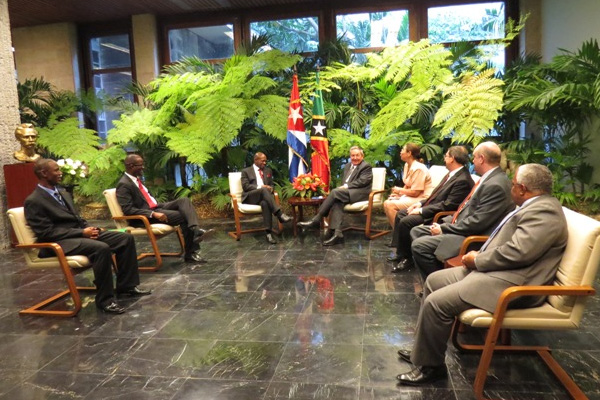 St. Kitts and Nevis issues another call for an end to the embargo against Cuba

Basseterre, St. Kitts (CUOPM) — Another call for the Government of the United States to end the 50-year-old embargo imposed against Cuba.

He told invited guests at the ceremony that St. Kitts and Nevis supports annually at the United Nations General Assembly, the Cuban-sponsored resolution “Necessity of ending the economic, commercial and financial embargo imposed by the United States against Cuba.”

“We continue to avail ourselves of every opportunity and in every forum to appeal to the United States of America to bring to an immediate end its unfair treatment of the Cuban people who continue to suffer unreasonably as a result of the decades old embargo. Cuba is our neighbour. Cuba is our friend and we shall continue to exploit all possible means of speaking on their behalf in the international community on this issue,” said Foreign Minister Nisbett.

“St. Kitts and Nevis together with the majority of countries within its hemisphere has supported Cuba in its quest for normal and constructive relations with all nations around the world and so from Barbados to Japan and Argentina to Germany, from South Africa to Brazil and from Canada to Britain, the nations of the earth through their diplomatic missions are represented here in Havana Cuba,” Dr. Douglas said.