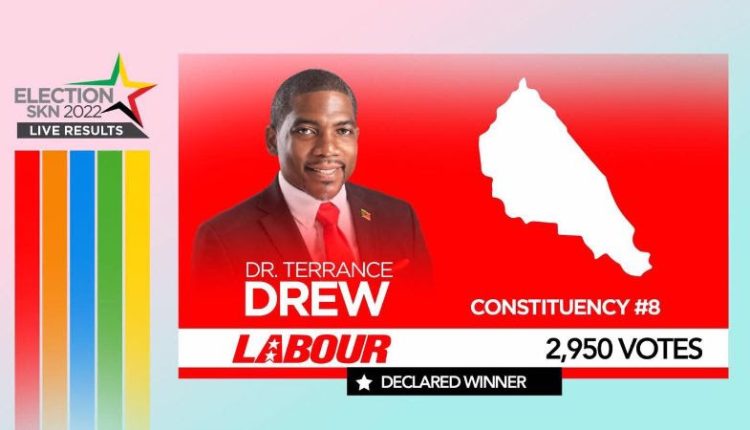 Basseterre, St. Kitts,  August 6 2022 (SKNIS) — The St. Kitts and Nevis Labour Party(SKNLP), led by Dr. Terrance Drew, has convincingly won the Federal General Elections in St. Kitts and Nevis held on August 5, 2022, by taking six of the 11 seats that were contested.

The Elections were observed by the Organization of American States (OAS), CARICOM and a local NGO coalition.

The other two constituencies that were contested in St. Kitts were numbers 7 and 5 respectively, which were won by Dr. Timothy Harris, Leader of the People’s Labour Party, and Shawn Richards, Leader of the People’s Action Movement. Dr. Harris won his seat with 1266 votes and 53.6 % of the votes cast. Mr. Richards on the other hand came out on top with 1025 votes with 48.7 % of votes cast.

On the sister island of Nevis, the three seats that were contested were swept clean by the Concerned Citizens Movement guided by its leader Mark Brantley. Mr. Brantley won in Constituency #9 with 1685 votes amassing 55 % of the votes cast; Eric Evelyn emerged triumphant with 616 votes totalling 69.8 % of votes cast and Alexis Jeffers of Nevis #10 finished with 1172 votes with 50.1 percent of votes cast.

Dr. Terrance Drew of the SKNLP is expected to be sworn in as the country’s fourth prime minister following Dr. the Hon. Timothy Harris.