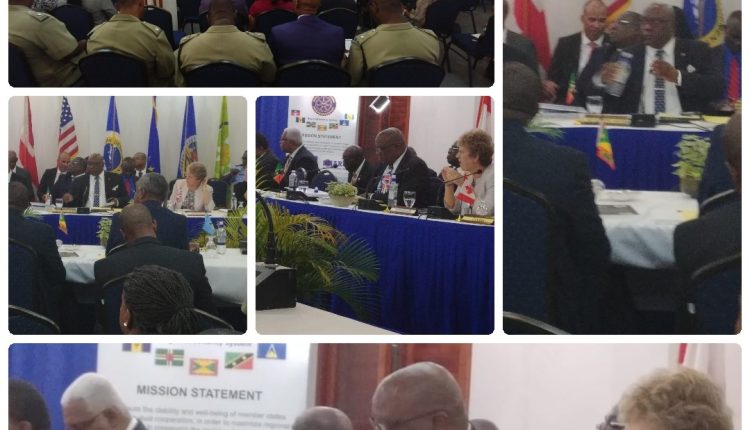 St. Kitts and Nevis’ PM and National Security Minister, Dr. The Hon. Timothy Harris, Is in St. Vincent and the Grenadines for Regional Security Meeting

Prime Minister and Minister of National Security of St. Kitts and Nevis, Dr. the Honourable Timothy Harris, is in St. Vincent and the Grenadines for a Regional Security System (RSS) Council of Ministers’ Meeting that is being held today, Friday, April 5th, 2019, at the Beachcombers Hotel.

The RSS is the military support unit for the OECS sub-region.  Its membership comprises the independent countries of the Organization of Eastern Caribbean States, namely Antigua and Barbuda, Dominica, Grenada, St. Kitts and Nevis, Saint Lucia, and St. Vincent and the Grenadines along with Barbados, which is a Caribbean Community (CARICOM) Member State.  RSS Council Members comprise Government Ministers who hold responsibility for the National Security portfolio in their respective countries.

The Regional Security System promotes cooperation among the Member States in the prevention and interdiction of traffic in illegal narcotic drugs, and provides assistance to them in matters related to national emergencies; search and rescue; immigration control; fisheries protection; customs and excise control; maritime policing duties; natural and other disasters; pollution control; combating threats to national security; the prevention of smuggling, and the protection of off-shore installations and exclusive economic zones.

During his first press conference for 2019, held on Wednesday, January 16th, Prime Minister Harris said that, “The RSS is a critical asset available to all RSS Member States.”

The Honourable Prime Minister added, “In fact, over the last four years, we [St. Kitts and Nevis] have contributed $7.4 million in membership dues to the RSS.  This is our contribution to the preservation of regional security.”

The Government of St. Kitts and Nevis has invited the Regional Security System into the country on several occasions to help complement security manpower.  Prime Minister Harris noted at his January 16th press conference that the RSS’ presence “provides the opportunity for enhanced learning and training for the Police Force and for building their capacity to work in operations across law enforcement agencies at home and abroad.”

During an exclusive interview with ZIZ’s Jason Davis in September 2016, Prime Minister Harris said that Heads of Government from RSS Member States had condemned St. Kitts and Nevis’ Leader of the Opposition, Dr. Denzil Douglas, for trying to dissuade them from supporting the Government’s call for the Regional Security System to assist the country in improving safety and security.  Dr. Douglas had written to and phoned Heads of Government, urging them to refuse to support deploying the RSS to St. Kitts and Nevis.

Prime Minister Harris said during the interview that, while “Heads of Government from Member States of the OECS and Barbados are prepared to put their citizens in service to maintain peace and tranquility of St. Kitts and Nevis, a former prime minister was reckless enough to attempt to discourage his former colleagues from sending this assistance to St. Kitts and Nevis.”

Supporting Prime Minister Harris at today’s meeting in St. Vincent and the Grenadines are Acting Commissioner of the Royal St. Christopher and Nevis Police Force, Mr. Hilroy Brandy and Lieutenant Colonel of the St. Kitts-Nevis Defence Force, Mr. Joseph Anthony Comrie.  High-level delegations from Canada, the European Union, the United Kingdom and the United States of America are also in attendance.

St. Kitts and Nevis hosted the annual RSS Council of Ministers’ Meeting on Friday, March 17th, 2017 under the chairmanship of Prime Minister Harris at the St. Kitts Marriott Resort.