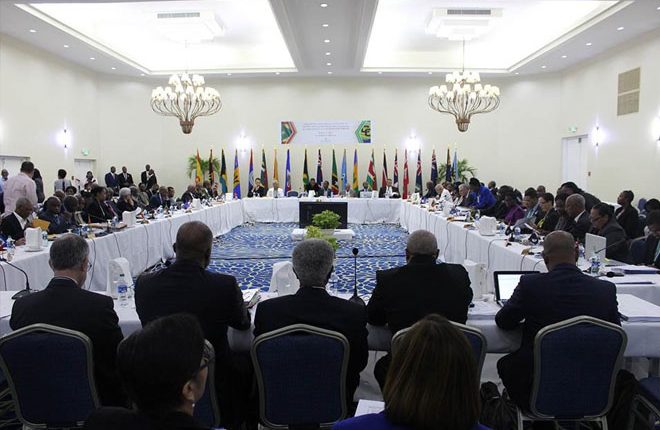 (Press Unit in the Office of the Prime Minister) – Prime Minister of St. Kitts and Nevis, Dr. the Honourable Timothy Harris, made a clarion call for greater attention to be placed on addressing cases of non-communicable diseases (NCDs) in the Caribbean region.

The prime minister’s call came as CARICOM observes the 10th anniversary of the Port-of-Spain Declaration on Non-Communicable Diseases (NCDs), which is aimed at uniting the region to stop the epidemic of NCDs.

Addressing his fellow Heads of Government during the business session of the Thirty-Eighth Regular Meeting of the Conference of Heads of Government of the Caribbean Community (CARICOM) on Wednesday in Grenada, Prime Minister Harris admitted that the “significant leadership we demonstrated in 2007 on NCDs seems not to have resulted in consistent action required to reposition our region in a path of better control and prevention of NCDs.”

The St. Kitts and Nevis leader, who serves as CARICOM’s lead spokesman on health matters, stressed that the agenda for a prosperous Caribbean is being undermined by the threats of an unhealthy population and the associated costs of treatment and consequential loss of productivity.

As such, Dr. Harris stated that the time has come for urgent action to be taken on four main risk factors associated with NCDs, namely; unhealthy diet, lack of physical activity, tobacco use and harmful use of alcohol.

“I am advised that of all 4, smoking has the greatest impact on the diseases taken collectively. Control of smoking represents ‘low hanging fruits’ for the implementation of NCD prevention and control measures,” Prime Minister Harris said.

He continued, “We are being urged this year to do what we commit to do in 2016, end smoking in public places as a way to reduce exposure of the people of the Caribbean to tobacco smoke. Specifically, this Conference is being urged to commemorate the 10th Anniversary of the 2007 NCD Summit by declaring CARICOM a region free of tobacco smoke by 2022 and backing this commitment by legislation.”

Dr. the Honourable Timothy Harris further called for the hosting of a meeting of Ministers of Finance of CARICOM to “discuss the economic implications and to address fiscal responses to the NCDs.” This meeting, he said, can be hosted in St. Kitts and Nevis.