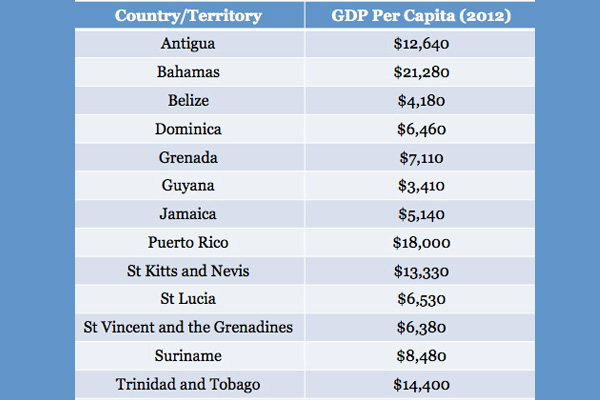 St. Kitts and Nevis ranks fourth in Caribbean in GDP per capita

(CUOPM) The World Bank is reporting that St. Kitts and Nevis ranks fourth in GDP per capita in the Caribbean – from The Bahamas in the North to Guyana and Suriname in the South. .

According to the Caribbean Journal the information is contained in the 2014 World Development Report.

So what is the richest country in the Caribbean Community, ranked by GDP per capita?

The Bahamas is followed by Puerto Rico, which has a GDP per capita of around $18,000.

Trinidad and Tobago is next at $14,400, followed by St Kitts and Nevis, which, despite being the smallest country in the region, has a per capita GDP of about $13,330, according to the data.

How is the rest of the Caribbean ranked? Check out the list below:

The report did not include specific data for the region’s other countries, including Cuba, Dominican Republic, Barbados and Haiti, along with overseas territories and departments in the Caribbean was not included in the World Bank’s report. It did, however, place them in bands based on estimated GDP per capita.

Barbados is ranked as “high income,” meaning a GDP per capita of at least $12,616). Cuba is ranked as upper middle income (between $4,086 and $12,615). Aruba, Curacao, the Cayman Islands, St Maarten, St Martin, the Turks and Caicos Islands and the US Virgin Islands are ranked as high income.

No data was released on the Dominican Republic or Haiti in the report.