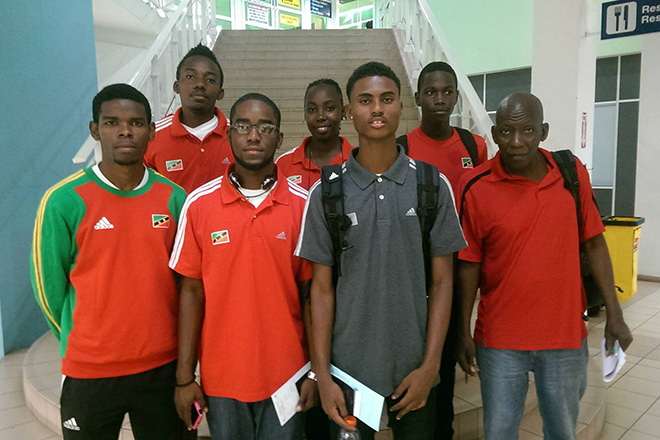 The St. Kitts and Nevis contingent left on Thursday 2nd July 2015 for Martinique to represent the Federation at the 57th Caribbean Seniors TT Championship from  3rd – 9th July 2015. Twelve countries are expected to participate in the tournament with an estimated 136 players competing for Caribbean.

The team is led by Coach Urban Freeman, joined by five players; Baggio Grant, Shaquan Hodge, T’Anje Johnson and Andre Freeman who constitute the Men’s Team for the event and Angelisa Freeman the lone female.  The players will contest the Men Team Championship, Doubles, Singles and Under-21 categories. Mr Freeman will participate in the Masters.

Coaches Urban Freeman and Calvin Lake emphasized the importance of the event to assess the athletes’ development since the last outing at CAC Qualifiers in El Salvador of August 2014. They recognized that the young athletes represent the future of table tennis in the Federation and ought to take ownership of the responsibility entrusted in them to make the nation proud.

Kevin Hope, SKNTTA President, expressed his optimism that the contingent can compete and do well at the championship. “This exposure allows the junior athletes in particular to develop the mental strength, confidence and match experience to compete on the international stage. Debutant Junior table tennis player, Shaquan Hodge is expected to be the major beneficiary of the event.”