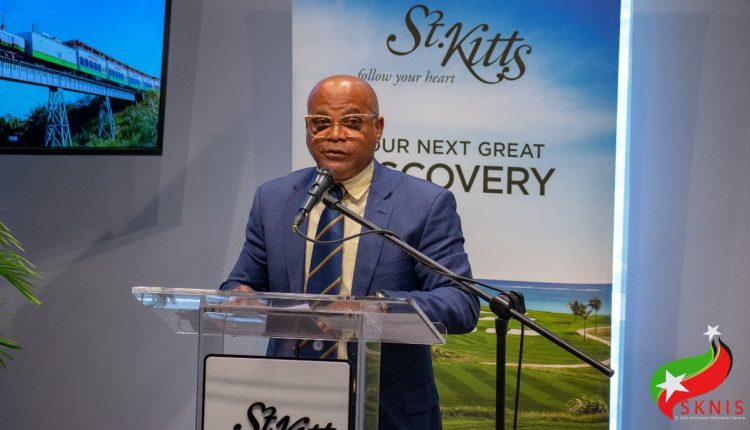 St. Kitts and Nevis to Capitalize on Pent-Up Demand for Travel

Basseterre, St. Kitts, February 24, 2022 (SKNIS): Tourism officials in St. Kitts and Nevis are poised to capitalize on the growing demand for travel that has gripped persons in key tourism markets such as the United States, Canada and the United Kingdom.

This was according to the Honourable Lindsay Grant, Minister of Tourism, during a press conference on Wednesday, February 23, at the St. Kitts Marriott Ballroom.

“Together, we have once again overcome another obstacle on our rebuilding journey. As we move forward, it is our goal to capitalize on the pent-up demand for travel and the easing of restrictions in our source markets,” said Minister Grant.

Minister Grant touched on Canada’s easing of restrictions where the country lowered its risk level for international travel from four to three and lowered the entry requirements for Canada for its citizens and residents.

“This will undoubtedly result in a renewed desire to travel by this key source market. We will not see a return of the Air Canada flight this spring due to operational issues, but this does not equate to no Canadian arrivals, as 60 percent of our Canadian visitors travel via the United States as the Air Canada flight is a seasonal flight, a season that only has two months remaining,” he said.

The tourism minister updated the general public on a series of meetings that occurred last week when the team at the St. Kitts Tourism Authority travelled to Routes Americas and held discussions with the Federation’s key airline partners.

“During these meetings, they were able to gain insight into some of the challenges faced by the airline industry and the opportunities for growth for the next winter season,” he said. “Some of the challenges reported by the airlines included a shortage of pilots due to increased sick leave, a downward adjustment in duty hours limiting the number of hours a pilot can fly in one week. While in other cases they reported shortages of aircraft. Despite the challenges faced by our key carriers, we are still able to maintain airlift during the summer.”

Equally important, Minister Grant outlined the airlift schedule for April to September 2022.  From Miami, American Airlines will operate its daily flight from April 09 to August 13 with two flights on Saturdays. From Charlotte, the seasonal flight will end on April 02 and then resume on June 04 through to August 13, 2022. Additionally, American Airlines from JFK International will end on April 02.

“I want to highlight the fact that when we resumed our flights, during the summer of last year we were down to three flights from Miami per week. For this summer, we have been able to keep our daily Miami flight with a double flight on Saturdays,” said Minister Grant.  “For those carriers who go on normal late summer, early fall hiatus, the team also discussed the potential of an early restart in November and discussed the potential of growth in other markets for summer 2023 and beyond. With the small setbacks we suffered in January, the team and I are even more focused on generating demand for St. Kitts. I want to assure you that every effort is being made to maximize the capacity on our aircrafts and get heads in beds. However, we cannot do it alone. We need the partnership of all stakeholders,” he added.