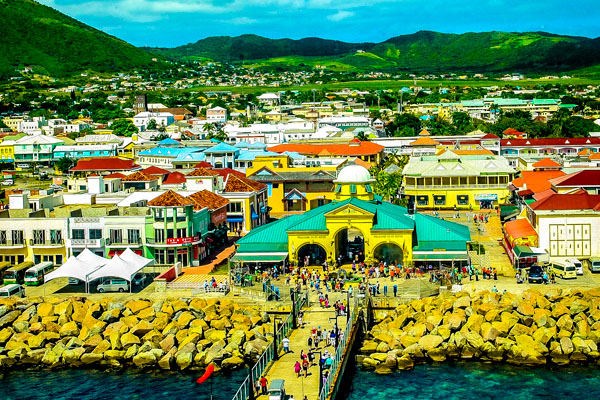 According to the World Bank’s 2014 World Development Report, St. Kitts and Nevis is first among the OECS nations and third among the 10 Caribbean countries.

The information is data of its main criterion for classifying economies, the gross national income (GNI) per capita.

The GNI per capita is the gross national income of a country divided by its total population. It is also the sum of value added by all resident producers, plus any product taxes (less subsidies) not included in the valuation of output, plus net receipts of primary income (compensation of employees and property income) from abroad.

Here are the rankings of the top 10 countries in the Caribbean, based on GNI

The most economically prosperous countries in the Caribbean, the Bahamas relies on tourism to generate most of its economic activity. The tourism industry not only accounts for over 60 percent of the Bahamian gross domestic product, but provides jobs for more than half the country’s workforce.

After tourism, the next most important economic sector is financial services, accounting for approximately 15 percent of its GDP. The Bahamas is one of the richest countries in the Americas.

Trinidad and Tobago is one of the wealthiest and well-developed nations in the Caribbean. In November 2011, the Organization for Economic Cooperation and Development removed Trinidad and Tobago from its list of developing countries.

Trinidad’s economy is strongly influenced by the petroleum industry. Tourism and manufacturing are also important to the local economy. Tourism is a growing sector, although not proportionately as important as in many other Caribbean islands. Agricultural products include citrus, cocoa and others.

St. Kitts and Nevis are a twin-island federation with an economy characterized by its dominant tourism, agriculture and light manufacturing industries. Sugar was the primary export from the 1940s on, but rising production costs, low world market prices, and the government’s efforts to reduce dependence on it have led to a growing diversification of the agricultural sector.

Tourism dominates Antigua’s economy, accounting for more than half of the gross domestic product. Antigua is famous for its many luxury resorts located around the coastline.

The growing medical schools and its students also add much to the economy. The University of Health Sciences Antigua and the American University of Antigua College of Medicine teach aspiring doctors.

Suriname’s democracy gained some strength after the turbulent 1990s, and its economy became more diversified and less dependent on Dutch financial assistance.

Bauxite (aluminum ore) mining continues to be a strong revenue source, and the discovery and exploitation of oil and gold has added substantially to Suriname’s economic independence. Agriculture, especially rice and bananas, remains a strong component of the economy, and ecotourism is providing new economic opportunities.

Grenada’s economic progress in fiscal reforms and prudent macroeconomic management have boosted annual growth to 5 to 6 percent in 1998–1999. The increase in economic activity has been led by construction and trade. Tourist facilities are being expanded as tourism is the leading foreign exchange earner.

St. Lucia’s educated workforce and improvements in roads, communications, water supply, sewerage, and port facilities have attracted foreign investment in tourism and in petroleum storage and transshipment. The island nation has been able to attract foreign business and investment, especially in its offshore banking and tourism industries, which is the its main source of revenue.

The manufacturing sector is the most diverse in the Eastern Caribbean, and the government is trying to revitalize the banana industry.

Bananas and other crops dominate Dominica’s economy, and nearly one-third of the labor force works in agriculture. In 2008, Dominica had one of the lowest per capita gross domestic product rates of Eastern Caribbean states. The country nearly had a financial crisis in 2003 and 2004, but its economy grew by 3.5 percent in 2005 and 4.0 percent in 2006, following a decade of poor performance.

Growth in 2006 was attributed to gains in tourism, construction, offshore and other services, and some sub-sectors of the banana industry. The International Monetary Fund recently praised the government of Dominica for its successful macroeconomic reforms.

Agriculture, dominated by banana production, is the most important sector of St Vincent and the Grenadines’ lower-middle-income economy. The services sector, based mostly on a growing tourist industry, is also becoming an important part of the economy.

Jamaica has a mixed economy with both state enterprises and private sector businesses. Major sectors of the Jamaican economy include agriculture, mining, manufacturing, tourism, and financial and insurance services. Tourism and mining are the leading earners of foreign exchange. Half of the Jamaican economy is generated by income coming from services such as tourism. An estimated 1.3 million foreign tourists visit Jamaica every year.

Note: The report did not give specific gross national income information for Cuba, the Dominican Republic, Barbados or Haiti.

The full list with GNI in US dollars is as follows: