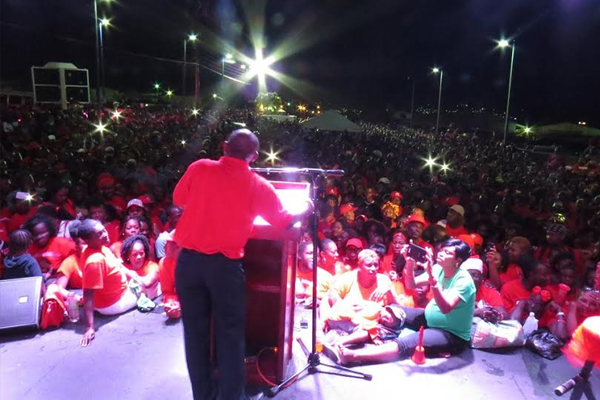 St. Kitts and Nevis will continue to shine under new Labour Government

Basseterre, St Kitts (CUOPM) — St Kitts and Nevis will continue to shine as a gem in the Caribbean with a green economy where there will be prosperity for all says the Federation’s Prime Minister the Rt. Hon. Dr. Denzil L. Douglas.

Speaking at a public meeting in Conaree on Monday night, Dr. Douglas said the Labour Government plans to take the country forward in keeping with its manifesto promises and track record of delivery.

He praised the vision of Labour candidate for St. Christopher 8, Dr. Terrance Drew, whom he said will transform Conaree, Half Moon Bay and environs for the benefit of the people.
The Prime Minister went further saying under the Conaree Drew development new housing will be established under the Labour Government’s next term in office.

Prime Minister Douglas said a green economy is the way forward where the landfill in Conaree will be removed and a system will be established where the garbage will be converted into energy and electricity through a new plant.

The Labour Government, said Douglas, will ensure that the country’s water resources and the environment are protected.

Agriculture, he added, will be embraced through the use of modern technology where green houses, irrigation channels and other systems to produce crops are implemented.

He reiterated that infrastructural development will also continue at pace with the two-mile area between St Kitts and Nevis being developed with real estate including hotels, marinas, beaches, etc, making it the pride of the country which can even be seen from space.

The Prime Minister warned that the people must not fall for the false and misleading campaign tricks of the People’s Action Movement (PAM/UNITY), which will try to tarnish the Sugar Industry Diversification Foundation (SIDF).

Dr. Douglas noted that it was under his administration the SIDF was established and used for the benefit of the people with formulation of programmes such as People Employment Programme (PEP).

He said the Opposition was now talking about utilising the money under the SIDF for the people when they were initially against the SIDF’s creation.

Don’t let Grant and Powell and Timothy fool you, the SIDF is yours,” said Dr. Douglas adding that these same people were once talking about putting the SIDF money into the Consolidated Fund but they are now silent on this.

A defiant Dr. Douglas said the Opposition was desperate, but he does not care because they are going to get a “licking” at the polls.

He assured that employment opportunities will continue under his leadership as investments roll into the country.

He said further that PEP workers will be trained to afford the skillset so they can move from earning minimum wage to a more decent salary level.

Dr. Douglas said the people of St. Kitts and Nevis will continue to progress under the new Labour administration.

He said the men must look healthy and strong, the children brain power enhanced and the women must look like they reside in high income earning countries.

He joked that the women must wear red nail polish and even lipstick indicative of their support for Labour.

Dr. Douglas said the Citizenship By Investment Programme was another achievement of the Labour Government which afforded young professionals to move towards entrepreneurship.

He said the more abuse he gets from the Opposition on this programme, the more he will expand it because it is the young people who are gaining from it.

The Prime Minister added that education will remain a priority for his Government and new technology must be embraced where children at the primary school levels are also given laptops.

“They must be able to say I want to be the next Bill Gates,” said Douglas.

Under health care, Douglas promised that a brand new health centre will be constructed in Conaree and pointed out that two new hospitals were currently underway on the island.

Dr. Douglas said although crime has decreased in the past 13 months by over 40 per cent, this was still unacceptable and the Labour Government will continue to work to stamp out the gun and gang-related violence.

He said under Labour there will be equality for all and no outsider will be discriminated against, but, in fact will be supported.

He added that no one would be abandoned as those who are disabled, mentally challenged, autistic or suffer from any ailment will also be looked after.

The Prime Minister further disclosed that Caribbean neighbours are supportive of the Labour Party adding that former Jamaican Prime Minister PJ Patterson has indicated full support for him.

Dr. Douglas said the entire Caribbean was looking on at what will take place in St. Kitts and Nevis because it is a gem in the region.

“This country under Labour has progressed and produced meaningful change. St Kitts and Nevis remains the number one country in the entire Caribbean,” Prime Minister Douglas boasted.