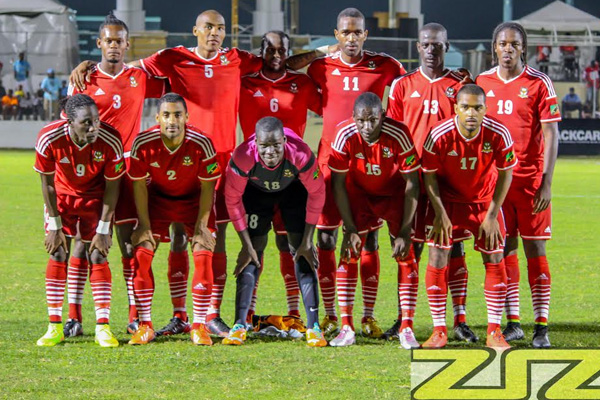 St. Kitts-Nevis advances to the Second Round

After a slow start to the tournament, the National Senior Men’s Football squad stormed back to win its next two matches to qualify for the second round of the competition.

Following a five-nil victory over Dominica on Friday, the national team added two more goals against Guyana on Sunday, all while not conceding a single goal.

However, St. Kitts and Nevis’ offense came alive in the second half of play. Shortly after play resumed, overseas-based player Zephaniah Thomas scored the game’s first goal in the 55th minute.

Five minutes later, Team Captain Atiba Harris added the second and final goal of the game to safely guide the national team home to victory and to the second round.

Both St. Kitts and Nevis and St. Lucia ended the tournament with two wins and seven points. However, the Sugar Boys won the group with a four-point goal difference.

In the first game of the night, St. Lucia defeated Dominica in a 2-1 encounter. Cliff Valcin struck twice for St. Lucia in the 12th and 71st minute while the lone goal for Dominica came in the 68th minute compliments Julian Wade.

St. Kitts and Nevis now joins Haiti, Barbados and French Guiana in group eight in the second round. Those matches will be played from October 6th – 13th in Haiti.