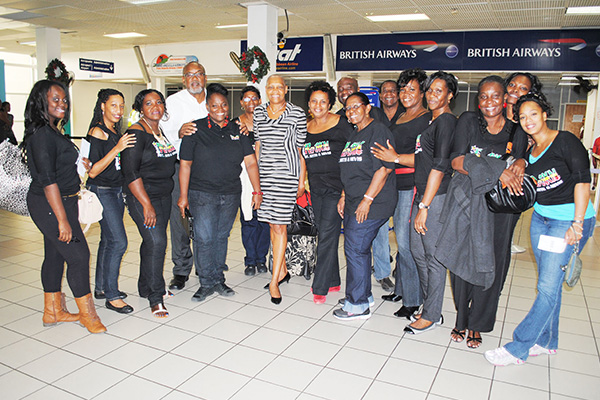 Basseterre,  St. Kitts — Federal Minister with responsibility for Culture, the Hon Marcella Liburd, has said that there is strength in diversity and has expressed gratitude to the Executive Governor of the Nigerian State of Akwa Ibom, His Excellency Chief Godswill Akpobio, for having invited the St. Kitts-Nevis Combined Choir to the West African country.

“As Minister of Culture, we are very happy that we are able to send a 30-plus strong choir to Nigeria to perform,” said Minister Liburd on Tuesday afternoon December 17 at the Robert L. Bradshaw International Airport, where she had gone to bid farewell to the Federation’s cultural ambassadors.

“We want to thank the Government of the State of Akwa Ibom in Nigeria, who are responsible for this trip; for funding it and for hosting us so we can go and share our culture, and it goes to show what a small world we are in, and diversity is the way to go, so that we can exchange cultures.”

The group which was led by Ambassador Her Excellency Mrs Astona Browne, and under the directorship of Mr Clyde Richardson, boarded a British Airways Boeing 777 airliner for London Gatwick and were due to make a connection for Nigeria, from London Heathrow, Wednesday evening to arrive in the West Africa country’s commercial capital Lagos on Thursday.

Minister Liburd recalled that a Nigerian delegation led by the Executive Governor of the Nigerian State of Akwa Ibom, His Excellency Chief Godswill Akpobio, visited the Federation in the month of September and Kittitians and Nevisians were able to view Nigerian culture from the country’s students who are residents in the Federation.

“Now we are able to go and display our Kittitian and Nevisian culture in Nigeria,” expressed Minister Liburd. “We are very happy for the exposure that this would give to our nationals who certainly I know will be proud when they perform and would come back and be able to share with us their experiences. I believe that is what we are all about in these days as I said diversity is really the way to go.

“There is strength in diversity and that is why this government embraces diversity because we also have Kittitians and Nevisians living in other territories who have made their homes in other countries, even as far as Africa and so we embrace diversity for the strength that it gives us and the learning that we get from each other in terms of culture, in terms of our economies, in terms of how to do business and even in terms of personal relationships.”

Minister Liburd was accompanied by her Permanent Secretary, Ms Sharon Rattan. Also at the airport to see the excited Kittitian and Nevisian cultural performers off to Nigeria was the Chairperson of the National Carnival Committee, Mr Sylvester Anthony.

“Isn’t exciting that St. Kitts is exporting part of its carnival and culture to Nigeria, all the way to the other part of the world?” posed Mr Anthony. “St. Kitts is going out there to make its name known and I am extremely pleased to be here at the Robert L. Bradshaw International Airport to see off this delegation going on to Nigeria to represent this Federation.”

Director of the St. Kitts-Nevis Combined Choir, Mr Clyde Richardson, explained that after an invitation from the Executive Governor of the State of Akwa Ibom was extended to the government in St. Kitts-Nevis, a group of 33 persons from both St. Kitts and Nevis was put together for the performance. It had been meeting primarily at the Anglican Church for the last eight weeks to get ready.

“We are doing music that is definitely Caribbean,” said Mr Richardson when asked what the group would be presenting when in Nigeria. “We have some very good musicians that can put over the rhythms of the Caribbean from soca to calypso to reggae; we will be doing that kind of feel for the music.”

The group returns to the Federation on Tuesday December 24, and according to the choir director, the majority of them are going to Africa for the very first time. He noted that most persons were excited to make that kind of trip.  He explained that the nearly 19 hours of flying was not their major issue, as they were thinking of going to Mother Africa.

Liaison Officer Ms Etsu Bradshaw-Caines who is in the delegation to Nigeria said that the invitation by the Governor of the Nigerian State of Akwa Ibom, His Excellency Chief Godswill Akpobio, was as a result of the warm Kittitian and Nevisian hospitality that members of his entourage received when they visited the Federation for the 30thIndependence Anniversary celebrations.

“This is an exciting moment for us, and you know why we are going? Because St. Kitts and Nevis shows such outstanding hospitality,” said the Liaison Officer, a daughter of the Federation’s First National Hero, the Rt Hon Sir Robert Llewellyn Bradshaw.

“The Governor and his entourage came to visit us for independence, and when they left, they couldn’t even close the door of the plane. They opened it again and said we have to come and visit them. We received an email inviting not only the five of us who took care of them but they wanted us to bring 30 people.