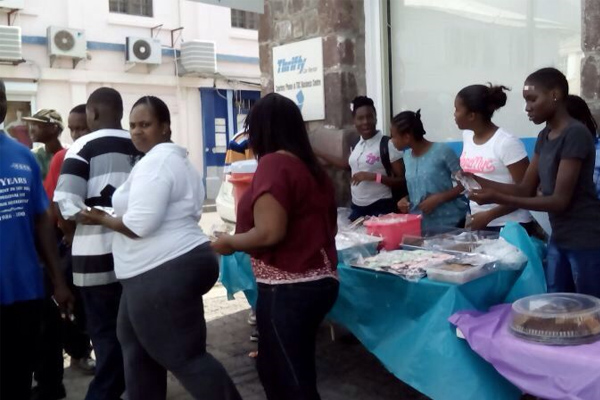 Basseterre, St. Kitts– On Saturday 24 May 2014, members of the St Kitts Nevis Defence Force Cadet Corps (SKNDFCC) and their parents took time out of their usual Saturday family routine to carry out a Cake Sale, organized by the Cadets to raise funds to assist Miss Vernel Thomas in travelling overseas to receive urgently needed medical care.

Miss Thomas an eleven (11) year old, who lives in Verchilds Village St. Kitts, is in need of medical attention to mitigate a tumor growing on her face. Her family, including her caretaker Sergeant Marcia Flanders, a serving member of the St Kitts Nevis Defence Force (SKNDF), has appealed to the public for financial assistance to aid Vernel travel overseas where she can receive specialist medical attention. The Cake Sale which started at 0700 hrs (or 7 am) ended a little after midday resulted in a total of five hundred and sixty five dollars and seventy two cents (EC$565.72) being raised.

The SKNDFCC took the initiative to organize the fundraising activities in support of Vernel. To this end, significant contributions were made by the cadets and also their parent and guardians to make the Cake Sale a success. Monetary donations were also received from members of the general public who were pleased with the industrious and generous goal of the Cake Sale. These civic minded citizens has requested to remain anonymous.

As a follow up fund raising activity, a car wash was held by the Tamarind Tree in Greenland close to the Alliance Francais Centre, on Saturday 07 June 2014. This event commenced at 8am and concluded at 1 pm. The Cadets feel pleased with the generosity displayed by the general public in support of the fundraising events and are grateful for the support received from parents, friends and patronage of the public. The funds raised will be subsequently presented to Miss Vernel Thomas’s family with a sincere hope and prayer that she receives the medical attention that she deserves soonest.