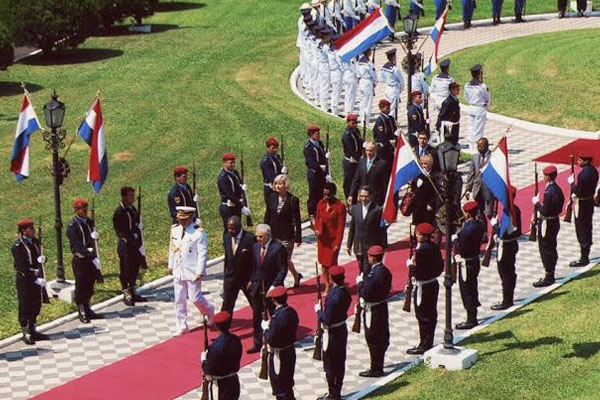 Basseterre, St. Kitts (SKNIS) — The Federation of St. Kitts and Nevis has built on the diplomatic relations established with the Republic of Paraguay in March 2013, by appointing Her Excellency, Ambassador Jacinth Henry-Martin as non-resident Ambassador.

Ambassador Henry-Martin pointed out that “St. Kitts and Nevis is a proud nation in the global community, an important and equal member of many international organizations in which our voice and vote carry the weight of full sovereignty.” As such, she stressed how gratified she was to be given such an opportunity.

“I am honoured to assume ambassadorship to Paraguay,” she declared. “Particularly so, at a juncture where St. Kitts and Nevis is expanding its geopolitical horizons, strengthening global alliances and positioning itself for international visibility as a small state whose voice and vote have a great impact.”

Her Excellency mentioned that this strengthened alliance offers various benefits for the Federation.

“There is every scope for this to frame a cohesive bond between our states, forging a relationship that will lead to broad technical cooperation in the areas of Education, Agriculture, Energy and Trade,” Ambassador Henry-Martin stated. “With some promotion, while there is a significant geographical divide, there is a wealthy subject of Paraguayans who can be enticed to visit the Federation.”

Ambassador Henry-Martin spoke highly of both countries and mentioned similarities.

“Both the Republic of Paraguay and the Federation has recently maintained a similarly progressive developmental pace in their respective sub-regions,” she said. “St. Kitts and Nevis is leading in Gross Domestic Product (GDP) per capita growth in the Organization of Eastern Caribbean States (O.E.C.S) and Paraguay in South America.

“The agriculture sector is a dynamic contributor to the economy of Paraguay and one that the Federation sees as strategically important to the lives and livelihood of our people and central to food security and sufficiency in the domestic market.”

The Ambassador assured that her experience as the Organization of American States (OAS) Permanent Ambassador to St. Kitts and Nevis will aid her role significantly in this new appointment.

“The Federation has had occasion to be supportive of Paraguay’s interest, prior to my recent appointment as Ambassador, as part of multilateral considerations within the ambit of the OAS,” she said. “Nonetheless, this new appointment forebodes even greater leverage for building consensus and support in negotiating strategically for the mutual benefit of our states.

“It will also build possibilities for exchange in supporting candidacies in international fora, which deal with emergent issues such as Climate Change, Disaster Preparedness, Security, Health, Social Justice and the strengthening and promotion of Democracy.”

Ambassador Henry-Martin joins the ranks of many Caribbean Community (CARICOM) colleagues with resident ambassadorship appointment to the United States and concurrent non-residential ambassadorship to other states within Central and South America.