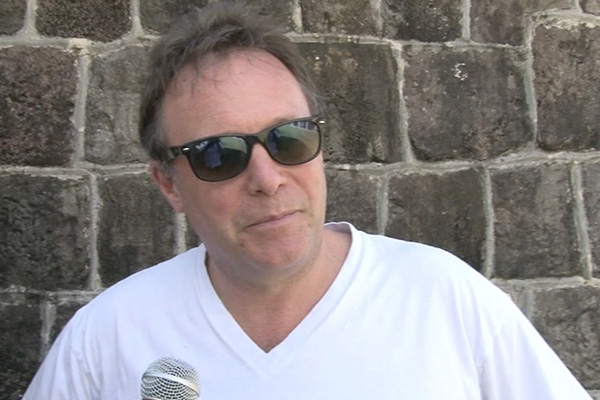 (SKNIS): The prospect of St. Kitts and Nevis’ participation in this year’s Caribbean Premier League (CPL) is improving after a visit from its Chief Executive Officer Pete Russell.

Russell flew into Basseterre on the weekend and toured key infrastructure developments necessary for hosting cricket matches including sporting facilities and hotels. He also had an opportunity to interact with senior government officials such as Prime Minister the Right Honourable Dr. Denzil Douglas and the Minister of Sports Honourable Glenn Phillip.

He reflected on his visit to the Warner Park Cricket Stadium, which has been outfitted with outdoor sports lighting and a 44×22 foot jumbotron.

“I’ve been very impressed with everything that the country is looking to do certainly from a sporting perspective, so the new stadium with the lights is fantastic,” Mr. Russell told SKNIS. “The infrastructures around the Caribbean, in terms of what you are used to in other international markets, are a challenge. So to see a complex which is obviously very close to being completed, spend the money and the time investing in lights of that stature, it’s only going to benefit St. Kitts but hopefully it will allow more international cricket to be played here.”

Minister Phillip accompanied Mr. Russell during the tour of the cricket facility and touted the strong attributes of the stadium which he cited as the intimate setting, crowd involvement and the enhanced experience when the upgrades are completed.

“What he (Mr. Russell) was also particularly pleased with was the fact that we are thinking of improving the party stand area,” Minister Phillip said, referring to a section where patrons enjoy an enhanced atmosphere during matches. “… Twenty 20 cricket right now is about entertainment. … They (the organizers) are trying to get the game into the United.States – Florida, New York – and so whatever standard we put forth is critical to our development going forward in terms of the CPL or any other sport.”

CPL franchise expansion seems unlikely until next season, however, CEO Russell stressed that the excitement of the five-week tournament will incorporate new territories.

“We’re very keen to take CPL to as many islands as possible,” he stressed. “We will be working very closely with the Prime Minister and the Minister of Sport to see whether that’s possible but we very much hope to be playing CPL cricket here in St. Kitts in 2014.”