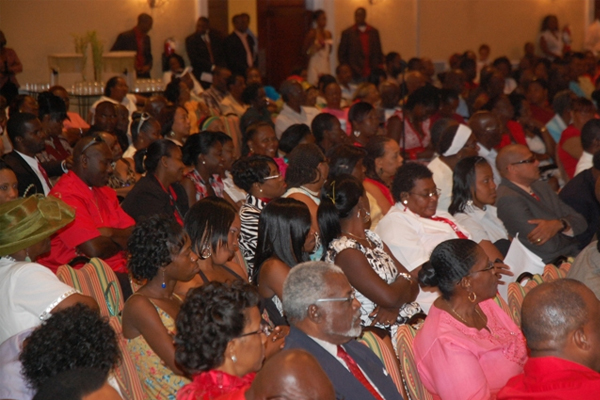 Basseterre, St. Kitts (CUOPM) – Some 600 delegates, invited guests and supporters of the ruling St. Kitts-Nevis Labour Party will gather on Sunday for the 82nd Annual Conference.

The Conference takes place at the St. Kitts Marriott Resort and Royal Beach Casino at Frigate Bay, under the theme: “SKNLP: Better, Stronger…Ready!”

The Conference, held every third Sunday in May, comes on the heels of the massive Labour Day March two weeks ago under the auspices of the Labour Party and its sister organization, the St. Kitts-Nevis Trades and Labour Union,- which saw more than 10,000 Labour supporters marching through the streets of Basseterre, while thousands more lined the route- all boldly decked in their “red Labour outfits” and demonstrating to the world their full confidence in the leadership of the Prime Minister, the Labour Government and the Labour Movement.

The Conference begins at 10 am on Sunday with the Public Session which will feature the Invocation; Welcome Remarks by the Party Chairperson, the Hon. Marcella Liburd; Fraternal Greetings; Presentation of Awards to the 2014 Miss Labour, Kristal Maclean of Constituency 8 and other contestants of the pageant held on Saturday 3rd May; the Honouring of the Mothers from the 8 constituencies in St. Kitts and the Keynote address by the Prime Minister and Party Leader, the Rt. Hon. Dr. Denzil Douglas.

Over 600 loyal supporters of the Party from all 8 Constituencies, including representatives from Young Labour and Labour Women and also the St. Kitts Nevis Trades and Labour Union will be in attendance.

The Public Session will also see a number of Invited Guests in attendance.

The agenda for the Business Session, which follows the Lunch Break, features the Annual Report from the National Executive of the Party; the Treasurer’s and Auditor’s Reports; Resolutions from the Executive, followed by Resolutions from the several Branches of the Party, Young Labour and Labour Women; the Election of Auditors and the Election of a new Executive Committee for the ensuing year.