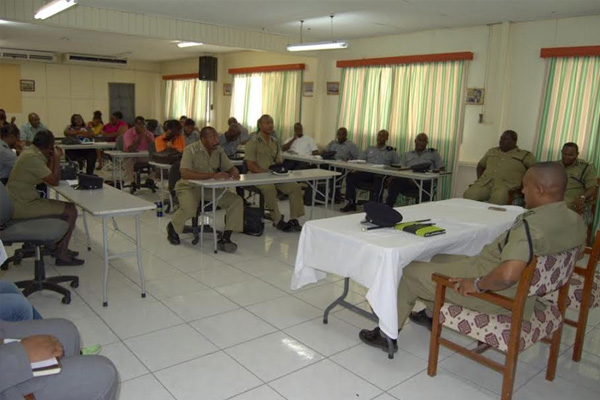 Basseterre, St. Kitts, (SKNIS) — Police officers in St. Kitts and Nevis are embracing a new programme to bridge the gap between themselves and at-risk youth as part of their community policing initiative.

The Teens and Police Services (T.A.P.S.) Academy was introduced on Thursday (July 03) to senior ranks of the Royal St. Christopher and Nevis Police Force (RSCNPF) as well as the junior officers who will implement the initiative in high schools across the Federation. It is designed to team up the police and teens to foster a better understanding of each other’s reality and encourage open discussion on topics directly affecting them.

The initiative was adapted from the Houston Police Department (HPD) in Texas, USA. Retired Assistant Chief of Police at HPD Brian Lumpkin commended the RSCNPF for implementing the programme after learning about it at a recent Commissioners’ of Police Meeting in Trinidad. He noted that the local police are uniquely positioned to have a positive impact with the population.

He highlighted that “the mission statement, the commitment to community policing, the type of officers that are very community oriented and some of the programmes you are already successfully involved in are commendable,” he stressed. “You are dialed into the education system and you have good relationships with the teachers. That’s key.”

Criminologist Dr. Everette Penn co-founded the TAPS Academy. He will facilitate the local training along with Assistant Chief Lumpkin. Dr. Penn highlighted bullying, anger management, drug usage and gangs as some of the topics covered in TAPS.

Deputy Commissioner of Police Stafford Liburd encouraged residents to embrace this new initiative which is keeping with the RSCNPF’s motto: Making the Difference in Community and Law Enforcement.