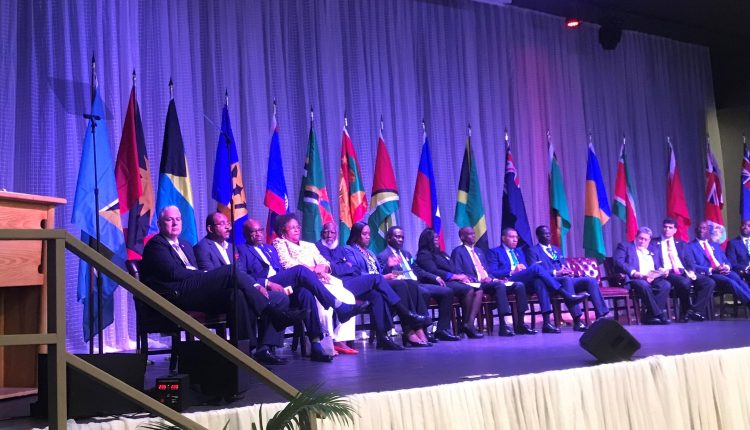 Prime Minister of St. Kitts and Nevis, Dr. the Honourable Timothy Harris is calling for dialogue to begin as soon as possible, to arrive at a solution to the continuing violence in Haiti.

“Colleagues, the deteriorating situation in our Member State, Haiti, is of great concern,” Prime Minister Harris said today, Wednesday, July 3rd, 2019, during his remarks as outgoing Chairman of the Caribbean Community (CARICOM) at the opening ceremony of the 40th Regular Meeting of the Conference of CARICOM Heads of Government.

The meeting is taking place in Saint Lucia this week under the chairmanship of Saint Lucian Prime Minister, the Honourable Allen Chastanet.

“The continuing violence causing loss of life and property must cease, and dialogue must begin in order to arrive at a solution to this cycle of instability,” CARICOM’s outgoing Chairman also said.

Prime Minister Harris further stated that the Haitian people deserve to go about their daily lives in a calm and peaceful environment.

“I reiterate the Community’s call for all parties to act responsibly and in the interest of the country.  We stand ready to offer the good offices of the Community to bring a resolution to this crisis,” the outgoing Chairman of CARICOM added.

Violent protests and unrest broke out in Haiti on February 7th, the second anniversary of President Jovenel Moïse’s election.  Demonstrators are demanding the removal of the Haitian President over allegations of corruption and embezzlement, which he denies.

On June 24th, the United Nations Security Council approved a resolution to create a UN “Integrated Office” in Haiti with the mandate of helping to strengthen political stability and good governance.  On October 16th, the Integrated Office will replace the UN peacekeeping mission in Haiti, which has had a presence there for 15 years.

The Secretary-General of the United Nations, His Excellency António Manuel Guterres is a special guest at the opening ceremony of the 40th Regular Meeting of the Conference of CARICOM Heads of Government.