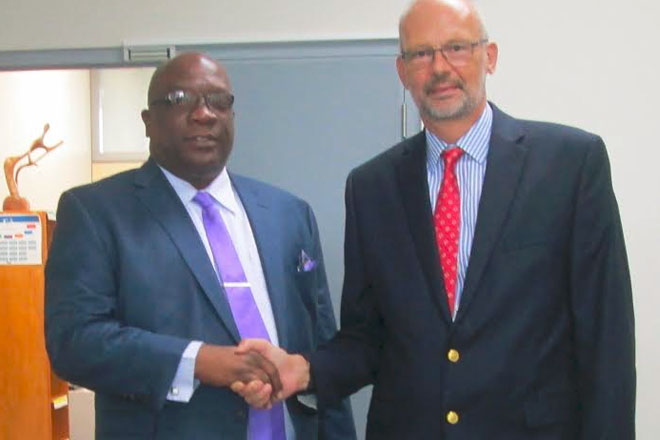 (PRESS RELEASE) – Prime Minister of St. Kitts and Nevis, Dr. the Honourable Timothy Harris and Cabinet Secretary, Mrs. Josephine Huggins met with the European Union’s Ambassador to the Eastern Caribbean, OECS and CARICOM/CARIFORUM, Mikael Barfod in Barbados on Thursday morning. The delegation officially learnt from the Ambassador that a disbursement of EC$12.5 million (4.2M euro) had been executed one hour earlier to St. Kitts and Nevis.

The reform of the EU’s Common Agricultural Policy in 2006 prompted it to establish a sugar adjustment scheme called the Accompanying Measures for Sugar Protocol countries (AMSP). AMSP supports restructuring initiatives in African, Caribbean and Pacific (ACP) countries that traditionally exported sugar to the EU.

Ambassador Barfod told the Prime Minister and Cabinet Secretary the country is set to receive an additional disbursement of EC$12.5 million (4.2M euro) at the end of 2016. This will mark the completion of the sugar compensation programme for St. Kitts and Nevis.

“The context is that when the World Trade Organization was created, it became clear that the quotas that the European Union provided to sugar-producing countries could no longer be maintained,” Ambassador Barfod said during an interview on Thursday. “We decided to compensate the sugar-producing countries that were amongst our partners for this, which became the sugar measures that we have in place today,” the Ambassador added.

According to a press release from the European Union on Friday, “The previous disbursement supported the launch of a juvenile co-educational rehabilitation centre for 30 residents; reform of the Social Development Assistance Act so as to improve implementation of social protection programmes; updating of alternative energy legislation leading to a more competitive private sector and improve energy security for households; the establishment of a land registry; and training for technical and vocational professionals. It is also expected to strengthen St. Kitts and Nevis’ Public Finance Management System as well as the fiscal space available to government through budget support.”

Ambassador Barfod said during Thursday’s interview, “There will be more assistance from our side to our partner St. Kitts and Nevis over the next four or five years.”

The Ambassador stated that future assistance to St. Kitts and Nevis would probably come via the EU’s regional program, which he disclosed still has 350M euros. He said the most recent tenders that are outstanding concern the provision of video surveillance and monitoring because this is the highest priority of the St. Kitts and Nevis Government. “That should be delivered soon,” Ambassador Barfod said.

The Ambassador is scheduled to leave his post in September when his four-year term ends.

Of St. Kitts and Nevis’ prospects, he said the European Union has observed that the country is now scoring an “enviable” growth rate. “At this particular point in time, it looks like St. Kitts and Nevis has got it right when it comes to economic reforms,” the Ambassador added.