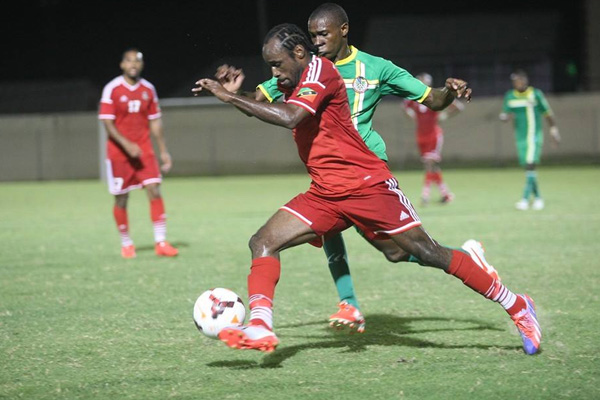 Playing in front of a packed and energetic crowd at Warner Park, the national team dropped five goals on Dominica.

The scoring drive started early in the game as Julian Wade scored an own goal in just the second minute of play. In the 18th minute, Romaine Sawyers put the local team up two goals after completing a penalty kick.

Team captain Atiba Harris got into the action by scoring the team’s third first half goal in the 28th minute.

The second half of play was much of the same as the local boys added two more goals to the fans’ delight. Zephaniah Thomas scored the team’s fourth goal in the 76th minute before Josh Leader added the fifth and final goal in the 85th minute.

St. Kitts and Nevis now leads St. Lucia in group six on goal difference. Earlier in the day, St. Lucia made light work of Guyana to register a 2-nil win.

Tournament play continues on Sunday with two more matches at Warner Park. In the first game, Dominica will take on St. Lucia while Guyana will clash with hosts St. Kitts and Nevis in the second match.