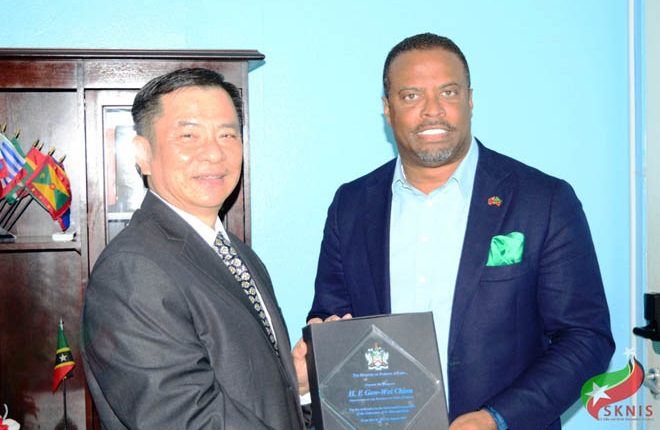 The lively, down-to-earth, yet efficiently professional ambassador was deployed to St. Kitts and Nevis back in March, 2015. Since his posting, Ambassador Chiou has worked tirelessly to further strengthen the long-standing mutual friendship between St. Kitts and Nevis and Taiwan. A public testament to the strength of this relationship is the way in which Ambassador Chiou ensured Taiwan’s involvement in almost every facet of St. Kitts and Nevis’ national development. Through his embassy he facilitated several high level visits to Taiwan for officials from the ministries of Education, Youth, Sports, Agriculture and others. He also facilitated visits to Taiwan for officials in the Police High Command.

Also included in the many successes that encapsulate Ambassador Chiou’s three-year sojourn in St. Kitts and Nevis are the implementation of the CCTV Security Project on both islands, the expansion of the LED Street Light Project and finalization of the two Solar Farm Projects which began some time prior. Under Ambassador Chiou’s watch, Taiwan continues to solidify its assistance to our country’s development through academic scholarship opportunities annually to study at universities in Taiwan, and monitoring of, among other things, the St. Kitts Eco-Park Tourism Project.

Ambassador Chiou brought to fruition, the realization of several bilateral agreements between the Republic of China (Taiwan) and the Federation of Saint Christopher (St. Kitts) and Nevis, including but not limited to, an Agreement on Mutual Exchange in Customs Matters, and an Agreement on Technical and Vocational Education and Training. Taiwan’s embassy also assisted greatly in financing the first ever Diaspora Conference held by St. Kitts and Nevis in June, 2018.

Ambassador George Gow-wei Chiou will officially demit office on August 04, 2018 and will be succeeded by H.E. Ambassador Tom Lee. On behalf of the government and people of St. Kitts and Nevis the Ministry of Foreign Affairs wishes to officially place on record profound thanks to H.E. Ambassador George Gou-wei Chiou for his sterling service while posted in St. Kitts and Nevis, and would like to wish him the best in his future endeavours. The ministry looks forward to working equally close to his successor to advance the mutually beneficial causes of our two nations.