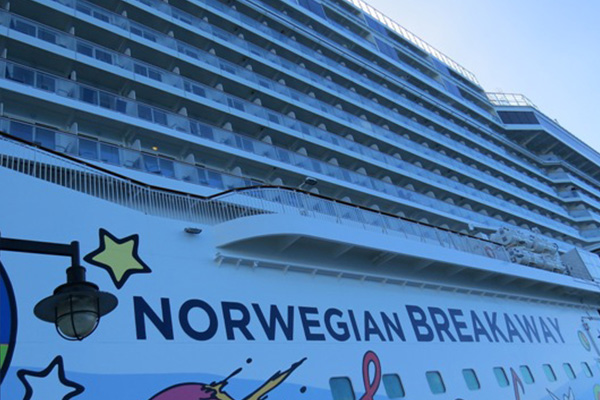 Basseterre, St. Kitts, (CUOPM) — St. Kitts’ Port Zante was among many firsts for 144,000 ton Norwegian Breakaway, which made its inaugural call Monday.

During a plaque exchange ceremony onboard, the American-born Captain Evans Hoyt said it was the Breakaway’s first year in service, having sailed from its dockyard in April 2013.

“This is our very first call here in St. Kitts. This is our first year in service. May 7th was our inauguration and it is real exciting times both for the Norwegian Breakaway and the Norwegian cruisers,” said Captain Hoyt.

“This ship has come out as the first in a new class of ships. This is our first season down here and our first call at your lovely island and I hope that you too have some of the same excitement that we have here.  It’s been a wonderful ride for us from the shipyard in Germany to the delivery, to our first season to Bermuda and then to the Bahamas and now finally to the Caribbean,”  he told officials from the St. Kitts and Nevis Ministry of Tourism, the St. Kitts Tourism Authority and the St. Christopher Air and Sea Ports Authority (SCASPA).

He said the guests have loved the Caribbean cruise and he was hoping to do more in the years to come.

“We have brought New York to the sunshine, to the Caribbean and they are really enjoying it,” said Captain Hoyt.

The Norwegian Breakaway is the largest passenger cruise ship to be built in Germany and Norwegian has had a long-standing commitment to New York.