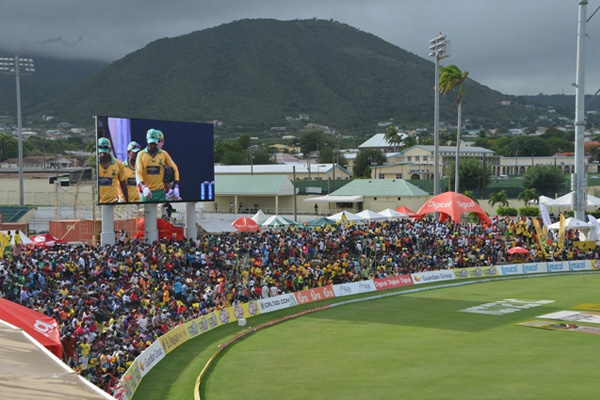 Basseterre, St. Kitts (CUOPM) — St. Kitts and Nevis is already in advance discussions with the organisers of the Limacol Caribbean Premier League (CPL) to host the 2015 games.

This was disclosed by the Federation’s Minister of Sports, the Hon. Glen Philip, who said that the window period of the games will be June to July 2015.

“The organisers have been pleased with our show of organisation of support for, and execution of the games that we are confident. We can achieve first right of refusal on any stage of the tournament that we make proposals for. Added to this, we have communicated our interest to the CPL to become a franchise holder which will allow us to enter a St. Kitts team in future tournaments,” said Mr. Phillip, who stated however that the CPL has advised that while its aim to expand the league, at this point no new franchises will be issued.

“It is therefore our plan to strategically ready ourselves for that day. We will seek to investigate and identify potential sponsors and at the same time seek to build cricket in the region that more and more St. Kitts and Nevis players may be entered in the CPL draft pool,” he said at a government-organised “Conversations for Progress,” town hall-style meeting.

Using the opportunity to give an update on the 2014 Limacol Caribbean Premier League games that were held at St. Kitts’ Warner Park Cricket Stadium, Minister Phillip, a first-term Parliamentarian said he was pleased by the overwhelming support the people of St. Kitts and Nevis gave to the CPL games.

“Preliminary data reflect that the average attendance for all the games except the finals was over 11,600 per game – that’s the three double headers, the Beefy Bash and the two Semi-finals.

Because of this massive support of our people from across St. Kitts and Nevis the atmosphere at Warner Park was truly amazing. All teams participating here received tremendous hometown support from here in St. Kitts. The people came out and the world saw that St. Kitts and Nevis was serious about Sport. At the same time, flights in the federation were filled and extra regional flights were put on to accommodate the many fans who came to federation for the games. Fans came from Guyana, Trinidad and Tobago, Jamaica, Barbados, Antigua Barbuda and the Virgin Islands,” Mr. Philip said, adding that a significant number of visitors from United Kingdom also watched the matches.

He disclosed that the CPL matches resulted in significant business in the local hospitality sector.

“Hotel accommodations were sold out, vehicles were rented out, restaurants were active, and tour operators were gainfully busy. I cannot forget the vendors who would have capitalised on sales on the grounds. All reports reflected that they were satisfied with their sales and returns on investment,” said Mr. Phillip.

He reported that CPL’s international media partners have recorded that the games played in Basseterre were broadcast to 220 Million homes around the world.

“This type of reach has created greater awareness for the St. Kitts and Nevis brands, and as a government, we shall begin to explore ways to convert this awareness into increased numbers of traditional, event and sports visitors to the Federation,” said Minister Phillip.

“Hosting the games was a tremendous success and it showed how well our facilities stood up and stood out. The nine matches played here during the CPL games have disproved the myths that our grounds are too small to assure competitive play. It is interesting to note that only one T20 century was scored and 15 half-centuries were recorded. In the games played here at Warner Park, the average team score was 153 or just under 8 runs per over. Our ground brought out what may have been the best bowling, fielding and batting efforts of the CPL players and the games were of an exceptional standard,” he disclosed.

He added that the CPL has announced that the Warner Park Grounds were adjudged both Best Pitch and Best Outfield in the 2014 CPL series.

“This further testifies that our facilities at Warner Park can compare favourably with the Sabina Park, the Kensington Oval and Queen’s Park Savannah. We applaud the care, pride and skill with which the pitch and field were prepared and I take this opportunity to commend Mr. Steadroy Douglas, our Head Grounds-man and his hard working team who prepared the pitch and kept it in tip top shape throughout our leg of the tournament. I also want to applaud the work of Mr. Thorne Phillip of the Royal St. Kitts Golf Course who worked on the outfield into a splendid condition. The work of these gentlemen and their teams testify to the talent of our people and the lengths we have gone to offer the best sporting facilities to our country and the world,” said Minister of Sports Phillip.