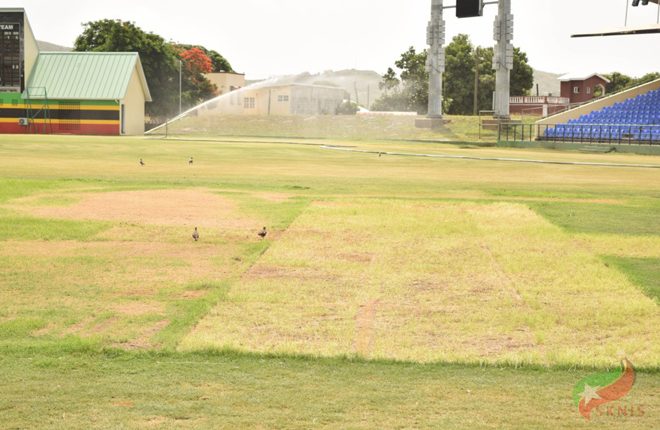 (SKNIS): Efforts by the Ministry of Sports to minimize the damage to the field at the Warner Park Cricket Stadium from the large crowds that attended the June 28 to 30 nightly concerts of the St. Kitts Music Festival were mostly successful according to Anthony Wiltshire, Director of the Department of Sports.

A special matting was placed on the grass to protect the playing surface from the thousands of patrons who packed the facility to see some of the best from the local, regional and international music industry. This measure was particularly important given that two One-Day International cricket matches will be played on July 28 and 31 between the West Indies and Bangladesh.

This means that the grounds crew can concentrate on repairing the limited areas where boards were mounted for varying activities. Mr. Wiltshire noted that the staff has performed exceptionally well in preparing the playing surface for international matches after the festival in the past, and he is confident that they will live up to their reputation.

The cricket pitch was also rebuilt a few months ago by the department’s staff and Mr. Wiltshire said the staff did a commendable job. This was expressed by Ken Crafton, a pitch consultant with the West Indies Cricket Board (WICB), who inspected the work during a recent visit to St. Kitts.

“He was here just a week or so ago and he has submitted a very good report on what is happening,” said Director Wiltshire. “In fact, he is satisfied with the work being done on the pitch. [There] are just a few areas that we need to work on and he is highly satisfied that we will be ready for the matches at the end of this month.”

Refurbishment is also taking place in some of the sky boxes. Pigeons seeking a nesting place turned their attention to the boxes, which officials are currently addressing.

“The contractor is here ensuring that all the areas that these pigeons might have been able to get into are blocked up and the roofs for the various boxes have been repaired,” Mr. Wiltshire stated, noting that boxes 1 to 11 were utilized during the St. Kitts Music Festival. “We have not had any issues with the birds,” he added, citing reports during and after the concerts.

Other cosmetic repairs are being performed at the facility and Director Wiltshire said that he was looking forward to welcoming patrons to the stadium for the aforementioned “Windies” matches and the home stand of the St. Kitts and Nevis Patriots during the 2018 Caribbean Premier League Twenty20 (CPLT20) tournament. Matches will be held at Warner Park on August 28 and 30, as well as September 01, 02 and 04.