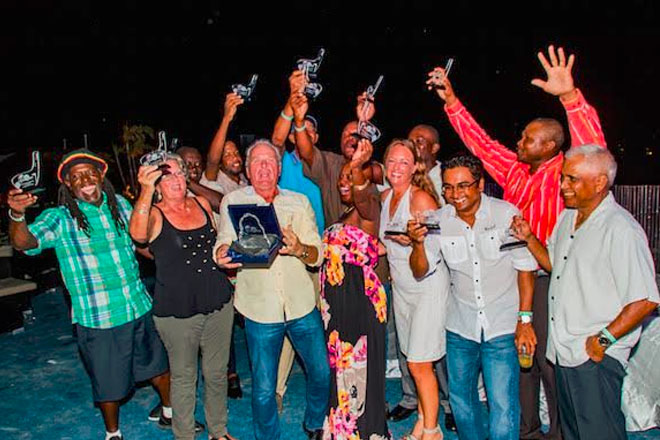 Mullet Bay, St. Maarten — The title for the Overall Team Gross score of this year’s ECGA tournament hosted by the St. Maarten Golf Association SMGA at the Mullet Bay Golf Course, was won by the island of St. Kitts with a total combined score of 1,281 Low Gross.

Martinique ended up in second place with a combined score of 1,307. The Overall Team Net score was won by St. Maarten with a score of 1,122 after deduction of the team combined handicap.

Due to good preparation, team spirit and home field advantage, the St. Maarten team was able to keep pace with the top teams and perform in an exceptional way. Winning top honours in the Overall Team Net score meant that all members in their specific category excelled during the weekend.

The Overall Low Net score in the Men’s category was won by team St. Maarten consisting of Howard Hobgood, Kit Lee, Jesus Rivera and Stanley Samuel with a combined score of 417, followed by St. Thomas who shot a combined Low Net score of 436.

The Overall Net Score in the Ladies team category was won by our own St. Maarten team consisting of Anne-Marie Bouillé, Sidsel Jacobsen and Gitte Poulsen who had a combined Low Net score of 283 beating the tournament favourites from St. Kitts by only 2 shots.

The Overall Low Gross score in the seniors team for players between 50 and 60 years old was won by the team of St. Kitts Nevis with an overall 302. In 2nd place came the island of Montserrat with a total combined score of 306. Again the St. Maarten Seniors team, consisting of Sam Bashir, Steven Mix and Philippe Thévènet showed their team spirit and blew away the field with a combined score of 279 Low Net after deduction of their combined handicap. In Second place with a 10 shot difference came in the island of Martinique with a combined score of 289 Low Net.

Canice Louis from St. Kitts shot a total score of 147 to win the Individual Low Gross in the category Senior’s for players over 50 years old, while Sam Bashir of St. Maarten won individual 1st Low Net in this category with a score of 134 Low Net after deduction of his handicap.

After the first day of this two day 36 hole tournament, St. Kitts was leading with an overall combined score of 646 gross, followed by Martinique with 653 and Guadeloupe was in third place with a score of 660 gross. St. Maarten was in 4th place after the first round with a combined gross score of 662 gross.

The Eastern Caribbean Golf Association Tournament is organized each year by a different host-country and consists of the best players from eleven countries that are a member of the Eastern Caribbean Golf Association (ECGA). These countries are: Anguilla, Antigua-Barbuda, Barbados, Guadeloupe, Martinique, Montserrat, St. Croix, St. Kitts, St. Lucia, St. Maarten and St. Thomas.

The festivities began on Friday evening at the SONESTA Great Bay Beach Resort with a grand opening of the tournament by the honurable Prime Minister Mr. Marcel Gumbs, which was followed by the flag raising ceremony and introduction off all participating countries and teams. The Generation New Status STM Drum Band, one of the community organizations that received donations from the SMGA over the last years, got the crowd in the festive mood by a great performance.