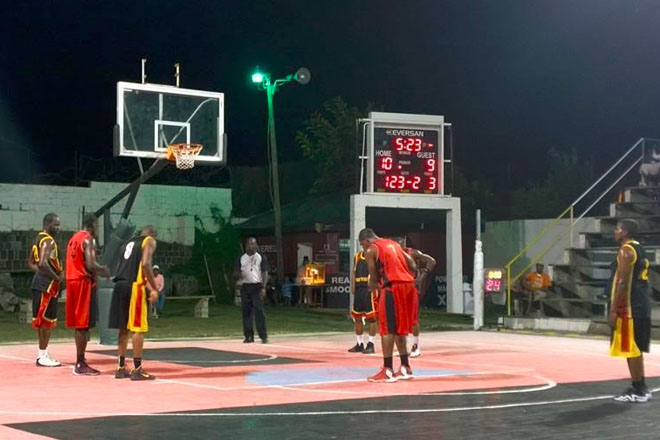 The St. Paul’s team came out aggressive in the early minutes of the game as the players built a 21-9 lead by the end of the first quarter. That 12-point lead eventually grew to a 21-point lead at the half, as St. Paul’s hustled on both ends of the court.

Hitters showed some fight in the third and fourth quarters of the game but were unable to match the aggression and hunger of the St. Paul’s players. Final score was 79-63.

Despite the win, Coach of the St. Paul’s Tuff Knots, St. Clair Buchanan was unhappy with his players’ performances in the latter part of the game.

He said, “We came to execute basketball. My guys started to play a little ‘lapsy’ with the basketball as they started to get tired after a while but instead of keeping the composure, they tried to run the ball. We’re up 20 points and we can’t be rushing it so they got to keep their composure so we’re gonna go over that. Know how to maintain the lead instead of letting the team getting it down to 9 points and then go back up again. So our strategy is really to play good defence, execute and just be victorious.”

Buchanan said he’s expecting the former Premier Division champions to make some adjustments ahead of game two but he remains confident that his team will again come out victorious.