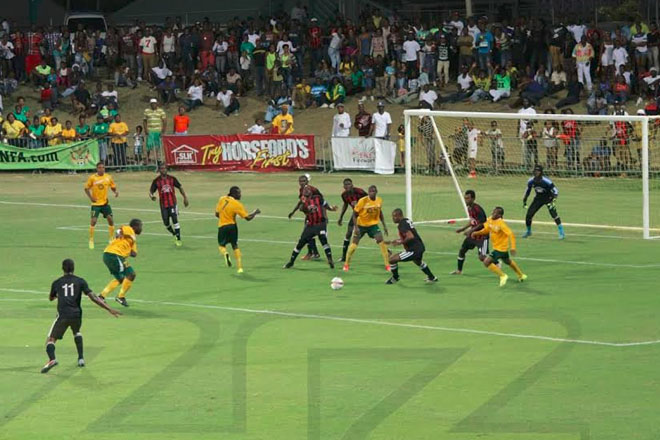 (ZIZ News) — The S.L. Horsford St. Paul’s United Football Team is now one game away from winning back to back championships, after winning game one of the SKNFA Premier Division finals on Saturday evening.

As they did in the last match of the Round-Robin Final Four Competition, Conaree scored its only goal very early in the game when Glenroy Samuels found the back of the net in the fourth minute.

The St. Paul’s team remained undeterred and came back to score all three of its goals before halftime.

The first goal came from the boot of Keithroy Freeman in the 21st minute then just five minutes later in the 26th minute, Darren Caines sent the St. Paul’s fans into frenzy when he headed in a goal off a corner kick.

A strike to goal from Joash Leader just a few minutes before halftime gave St. Paul’s an unassailable 3-1 advantage.

In the second half, the Conaree players did all they could but failed to break down the defence of the defending champions.

When the final whistle blew, it was 3-1 in favour of S.L. Horsford St. Paul’s United.

Game two of the Premier Division Finals will be played on Tuesday at 8pm.

That championship team defeated Dominica 2-1 at home and 1-0 away for a 3-1 aggregate victory.