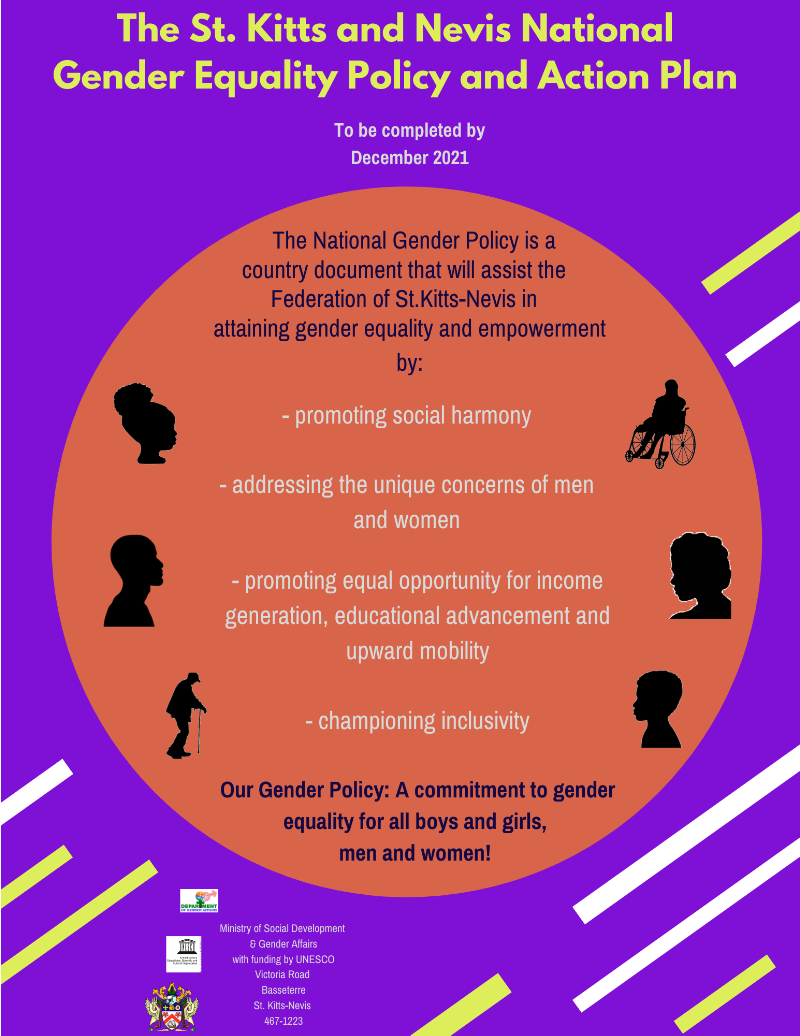 The event was attended by several persons, including representatives of Government Ministries, cultural and religious organizations, as well as community and advocacy groups.

Permanent Secretary in the Ministry of Social Development & Gender Affairs, Mrs. Janelle Lewis-Tafari welcomed participants, noting that many of those present had actively participated in the consultation process towards crafting the GEPAP – a journey that began in 2018 with sponsorship from the local UNESCO (United Nations Education, Cultural and Scientific Organization) Office. She urged all present, “I welcome you to the next leg of the journey as we collectively work toward gender equality in St. Kitts-Nevis.  Stakeholders, partners…this policy is not just the blueprint of the Department of Gender but is intended to be used by all agencies to inform your policies and programming. The work begins now.”

The Honourable Minister of Social Development Mr. Eugene Hamilton was also present to endorse the National Policy, noting that the GEPAP will help to empower people in St. Kitts-Nevis. “Social Issues are experienced differently by women and women. Through this Gender Policy, we can leap to a more equitable path overall. In accordance with the Sustainable Development Goal of Gender Equality, the Government along with the people of St. Kitts-Nevis can stand proud along with the developed nations of the world, knowing that the GEPAP, if implemented properly, will bring benefits for many generations to come”.  On behalf of the Government of St. Kitts-Nevis, he also thanked the support of UNESCO, headed by Ms. Dorothy Warner, in enabling the document to come to fruition.

In the second half of the Open Day, Trinidad-based Consultant to the GEPAP, Ms. Dwynette Eversley, joined participants via Zoom, briefing them on the framework of the Policy and the priority areas that will be focused on to achieve transformative change.  These include Agents of Socialization (i.e Culture, Family, Religion, Mass Media), The Rule of Law, Leadership and Decision-making, and Special Groups for Consideration, such as the elderly, youth, and persons of homosexual orientation.

At the end of the session, participants were given the chance to comment on and raise questions about the Policy and Action Plan, while also viewing Vision Boards displaying the main areas of the GEPAP.

Further information on this National Policy will be disseminated over the next few months, or can be gained by contacting the Department of Gender Affairs at 467-1223, ATTN: Mr. Virgil Jeffers- Director, or via email at: virgiljeffers@gmail.com