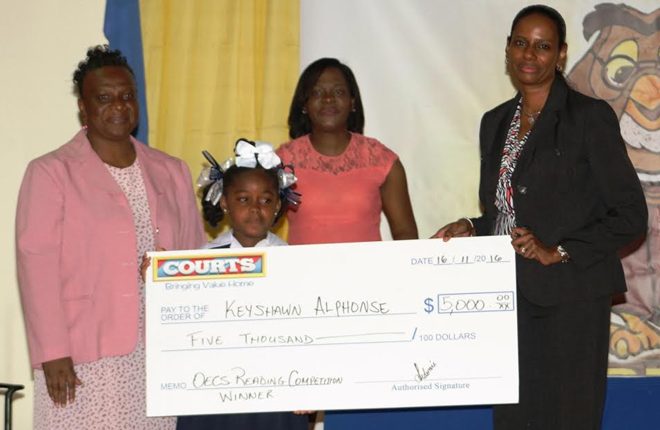 (SKNIS): Students from across the OECS were given an opportunity to showcase their reading skills during the 8th annual Courts OECS Reading Competition Finals, which was held at the Sir Cecil Jacobs Auditorium in St. Kitts and Nevis on November 16.

Permanent Secretary in the Ministry of Education, Williams V. Hodge, stated that the event not only showcased the bright minds and excellent readers, but will provide an avenue for the students to be true ambassadors of their respective schools and territories in the OECS (Organization of the Eastern Caribbean States).

The permanent secretary stated that since its inception in 2009, there has been significant improvement in the reading abilities of students, especially eight and nine-year-olds.

Mr. Hodge stated that literacy is a fundamental human right and the basis for lifelong learning. He added that literacy empowers individuals, families and communities by improving the quality of their lives.

The competition has been keenly contested each year and this year was no different.

“Students ability to read accurately and effectively, their pronunciation and articulation skills, their intonation, their inflection and diction, their confidence, their pitch, eye contact are some of the skills the competition seeks to assess,” said Mr. Hodge.

Mr. Hodge said that from the very beginning, Courts has partnered with the Ministries of Education across the OECS. According to him, the initiative is a welcomed one and he hopes for its continuation.

The winner of the competition was Keshawn Alphonse of Saint Lucia. Coming in second place was Kaylee Robertson of St. Vincent and the Grenadines and in first place was Justine Jarvis of Antigua and Barbuda. Other participants included Devshi Saxena from St. Kitts and Nevis, Shaydan Laville from Dominica and Alyssa Goddard from Grenada.

The Courts OECS Reading Competition was launched in 2009 with its primary goal being to improve reading abilities among youth. The competition aims to fight against illiteracy is schools particularly at the primary level. The competition benefits our children by promoting literacy and engendering a fun way to encourage reading within the structure of an exciting, healthy school competition.