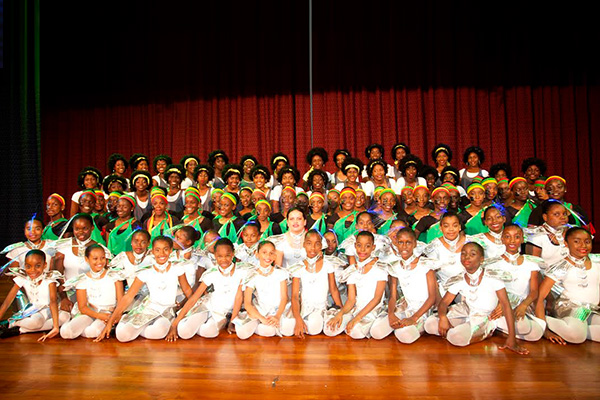 Success for the Children’s Dance Theatre’s – Shake It Off

St. Kitts  – Last Sunday 16th February 2014, the curtains of the Sir Cecil Jacobs Auditorium were drawn to the dazzling eyes of intricately costumed, eager-to-perform dancers whose very presence on staged wowed all in attendance. Yet again The Children Dance Theatre (CDT) proved to a packed auditorium that the language of dance is a universal one as the dance therapy themed recital left the audience pleading for a refill. Dr. Qwak and his patients gave riveting, dramatic performances and ensured each piece was tied together seamlessly.

The magic of this year’s choreography sent spectators through a whirlwind of emotions. CDT’s senior group, Rockets, opened the show with “Shake Your Groove Thing” – a dynamic, retro piece that instantly revved up the audience for the extraordinary standard of performance that would be maintained throughout the evening. From there, the intermediate group, Starlights, did not miss a beat as they kept their viewers in awe with the gravity defying stunts incorporated in the choreography of “Brave.” By the time the juniour group, Sparks, graced the stage with their inspiringly beautiful performance of “Roar”, the audience was in complete enchantment.

In response to the recital’s success, director Julie Martin exclaimed, “it was the best one yet, until the next one” and also announced that the call for an encore would be answered this Saturday 22nd February 2014. Tickets are available at Morton’s Supermarket and are moving briskly.

Whether you had the misfortune of missing it the first time or you are itching for a refill, The Children Dance Theatre will be nursing your entertainment needs with another dose of dance therapy this Saturday 22nd February 2014 at 6pm at the Sir Cecil Jacobs Auditorium.