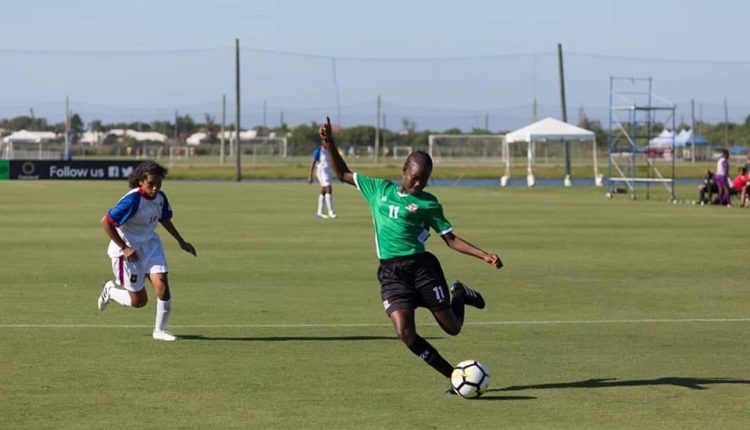 Sugar Girlz Tops Group A in Olympic Qualifying, move on to next round

The Sugar Girlz have pulled off a remarkable upset topping Group A of the Concacaf Women’s Olympic Qualification in Trinidad and Tobago. The Women’s national team trounced Antigua and Barbuda on Tuesday 10-1 in the final qualification match in Trinidad and Tobago, which was enough to take them ahead of all other teams in the group. This huge victory followed a 4-1 victory over the home team Trinidad and Tobago, sending shockwaves across the region. Now topping the group, the Sugar Girls are one step closer to Tokyo 2020 Olympic Qualification. Speaking after Tuesday’s match against Antigua and Barbuda, St. Kitts and Nevis Women’s Team Coach Jene Baclawski said she was “super pleased” with how the girls played. “We scored a goal in the 4th minute to go up 1-0 and then we really never really let our foot off the gas. After that it was 6-0 and then we were able to perform our goals and in the second half it was 10-0,” she said. She commended the goals scorers and said she was exceptionally proud of the girls.

“We are really exceptionally proud of how the girls played. They represented their country with pride. They finished strong, which was what we talked about all (Monday) and in our pre-game (talk). That was our focus: finish strong, get the job done and put ourselves in a position to qualify,” she said.

Coach Jene said this success will do a lot for football in St. Kitts and Nevis. For one, she believes it will motivate younger female players to come through the ranks and excel at football. “For this team, their ability to combine and quickly come together as a group, especially since some of them are homegrown and some of them live abroad…and to put up a performance on the field over the course of two weeks like we were able to was certainly exceptional and history making for the team. I am very of them and I very honored to be their coach and I look forward to the next steps,” she said.

Meanwhile, Phoenetia Browne, Captain of the team said the team is made up of a great and talented group of players and she is proud of their accomplishment. “We came here on a mission to qualify for the next round and we did just that,” she said after the match. “I think we have a great group of players—very talented and driven and we were always trying to make that happen.”

Browne also commended the coaching staff. “I think with our coaching staff they prepared us so well for every game. They spent hours scouting the other teams to make sure we put the best team out for every game,” she said. “I just think we just represented the country very well and we are all excited for the other round,” Browne concluded. The Sugar Girls registered three big wins and drew one of their matches in this round of the competition, conceding only three goals and scoring 20. In addition to the two recent victories over Antigua and Barbuda and Trinidad and Tobago, the Sugar Girls defeated Aruba 6-1 and drew 0-0 with the Dominican Republic.