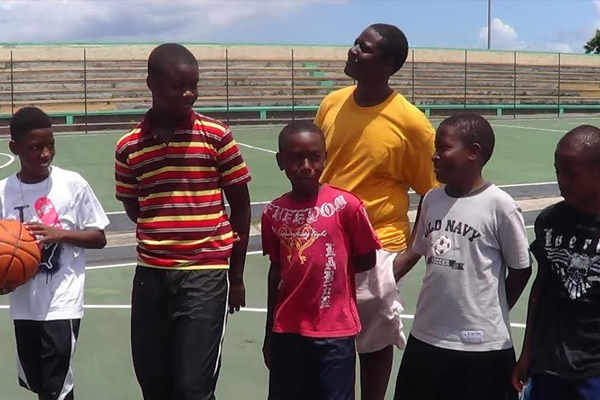 (Sports Page)— The 2014 edition of the Basketball clinic hosted by the Youth and Sports Department came to an end on Friday 18th July.

The sessions were held at the Grell Hull-Stevens Netball Complex under the close supervision of Basketball coach at the Department, Jeffrey Lewis, ably assisted by Track and field Coach, Shermon Caines who indicated that he also used the opportunity to learn a lot more about the game.

There were less than ten boys in attendance over the one week period but they were all enthusiastic as they expressed their joy at being a part of the clinic.

Caines explained that they learnt about the makeup of the Basketball court and the significance of the various lines.

They also learnt the basics of the game which included dribbling; ball control; passing and shooting, among others.

They also enjoyed friendly rivalry among themselves as they engaged in simulation matches and one on one competitions.

Caines is confident that the clinic can only improve next year and he expects a lot more children to participate.

The children for their part, all indicated that they had learnt a lot and vowed to represent the CSS Basketball team in the not too distant future.