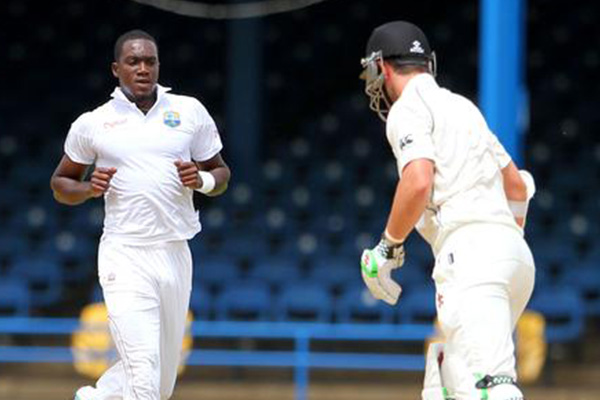 Cruising at 120 for one mid-way during the second session, New Zealand lost their last nine wickets for 101 runs to tumble to 221 all out, about half-hour before the scheduled close at Queen’s Park Oval.

At the heart of the revival was Taylor, who sliced through the Black Caps middle order to finish with four for 34, receiving excellent support from left-arm spinner Benn, who claimed three for 73.

Fast bowler Shannon Gabriel, one of two changes to the Windies team, picked up two for 43.

Left with seven overs to negotiate, West Indies lost talismanic opener Chris Gayle comprehensively bowled off-stump by left-arm seamer Trent Boult for one, to limp to six for one at the close.

Opener Kraigg Brathwaite, in for the axed Kieran Powell, was unbeaten on five with nightwatchman Benn yet to score.

Left-handed opener Tom Latham had earlier top scored with 82, his third successive half-century in Tests, while Ross Taylor was left stranded on 45 not out after the innings collapsed around him.

The innings was built on a 104-run stand for the second wicket between Latham and Kane Williamson, who struck 42.

Latham, in only his third Test, faced 163 balls in 229 minutes at the crease and struck ten fours while Williamson, a right-hander, counted five fours off 104 deliveries in an innings lasting just over 2-1/2 hours, after New Zealand opted to bat first.

They were brought together 38 minutes into the day’s play when Hamish Rutherford was caught at first slip for three by Gayle off Taylor in the ninth over of the morning, reaching at a wide ball.

Latham and Williamson then combined to resist the Windies attack with sound defence and positive stroke-play, to carry the Black Caps to lunch at 86 without further loss.

New Zealand had started watchfully, collecting their first boundary in the day’s tenth over when Latham drove the fourth ball of Gabriel’s first spell, to the straight boundary.

He picked up his second four in Gabriel’s next over with a steer behind point and had a third with an edge off the same bowler that fell just short of Gayle at slip, and sped to third man.

With lunch approaching, Latham moved into the 40s with a lovely straight drive off Benn and then edged the next ball wide of slip for another boundary, to go to 47. He reached his half-century with a single forward of square of Gabriel, in the penultimate over before lunch.

Williamson, meanwhile, had a slice of luck on 19, when he edged a cut at Benn 11 minutes before lunch, only for Gayle at slip to muff a sharp chance.

It was one of four missed chances by West Indies on the day, with captain and wicketkeeper Denesh Ramdin guilty of two of them.

After lunch, Latham, on 58, was dropped by the gloveman as he edged a cut at Benn but the Windies were rewarded five overs later when Gabriel prised out Williamson, when the batsman top-edged a hook to substitute Jason Holder at fine leg with the score on 120 for two.

Latham seemed en route to a hundred when he collected a boundary off Benn to third man and then whacked pacer Kemar Roach through square for another boundary.

Two balls later, however, he played away from his body to a length ball from Roach and sliced a catch to Benn who took a low tumbling catch to his left at gully.

In a superb last over before tea, Roach watched as his teammates squandered two golden opportunities to remove the dangerous Ross Taylor.

He beat the right-hander with the third delivery of the over, with one that angled in and straightened. With the very next ball, he clipped the outside edge of Taylor’s bat only for Ramdin to stand strangely statuesque as the ball flew to his right, wide of Gayle at first slip.

Taylor then nervously chipped the final ball to short mid-on where Kirk Edwards grassed a straightforward chance, high to his left.

Still well placed at 159 for three, New Zealand then lost their last seven wickets for 62 runs, as Taylor and Benn wrecked the innings.

Captain Brendon McCullum fell to the second ball after the resumption, trapped lbw on the crease by Benn without adding to his tea time four, at 161 for four. Taylor, who faced 80 balls and struck seven fours, posted 31 for the fifth wicket with Jimmy Neesham (15) before wickets tumbled again.

Left-handed Neesham flashed at a wide one from Taylor for Gayle to take the catch chest height at slip, and in the bowler’s next over, BJ Watling edged to Ramdin without scoring, as he prodded forward.

Gayle snared his third catch when Ish Sodhi picked him out at first slip off Taylor at 199 for seven before Benn trapped Tim Southee lbw for 10, and Gabriel prised out Mark Craig for four to a smart catch in the cordon by Darren Bravo.

Benn fittingly ended the innings when he had Boult lbw for one.