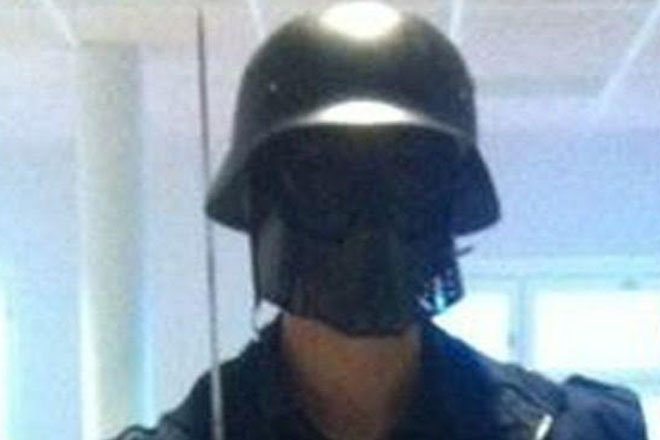 (BBC) – A masked man armed with a sword has killed a pupil and a teacher at a school in Sweden.

The suspect, clad in black, apparently posed for photos with students ahead of the attack, in the western town of Trollhattan.

Two further victims, a pupil and a teacher, are seriously injured. The attacker was shot by police and has died of his injuries. He was 21 and resident in Trollhattan, police said.

The king has said Sweden “is in shock”.

Eyewitnesses described chaos at the school, with hundreds of students fleeing from the building screaming.

Police responded to an emergency call reporting an attack in the cafe area of the Kronan school, at around 10:10 local time (08:10 GMT) on Thursday.

One teacher died of his wounds at the scene.

Two male students, aged 11 and 15, and another teacher were rushed to hospital. One of the boys has since died of his injuries.

The attacker was also taken to hospital with gunshot wounds and has since died.

Police have searched the suspect’s home.

A student at the school has provided a photo, apparently showing the attacker posing in the school corridor, ahead of the attacks.

It shows a man wearing black, with a helmet, a mask and a sword, possibly resembling a Nazi World War Two uniform.

Swedish newspaper Aftonbladet published an account (in Swedish) of a girl, who they refer to as Sara, who witnessed the attack.

The girl left her classroom and met two school friends who stood with a masked man holding a bloody knife, she said. He was playing “horrible, Halloween-type” music and did not speak, she said.

Her friends thought it was a joke and wanted to be photographed with the man, so Sara took a photo, Aftonbladet reports.

A teacher came out and asked the man what he was doing, the girl said.

“You’re scaring the children, you can go,” the teacher said.

The man just nodded then stabbed the teacher in the side with his knife, Sara said.

She and her friends ran. The man chased them but they managed to escape.

A similar account was given by a girl in the eighth grade to the Swedish newspaper Dagens Nyheter.

She said she was in a maths lesson when they saw the masked man in the corridor.

“We thought it was a Halloween joke,” she said. “He was completely dressed in black and had a mask.”

The girl said her teacher went out into the corridor and tried to remove the mask, and it was then the man attacked and stabbed with the sword, she said.

Police spokesman Thomas Fuxborg said police fired two shots, one of which hit the attacker. No motive was given for the attack.

King Carl Gustav said in a statement that he had learned of the events in Trollhattan “with great dismay and sorrow”.

Sweden’s Prime Minister Stefan Lofven will travel to the town this afternoon. He said it was a “black day for Sweden”.

“I think of the victims and their families, students and staff, and the whole of the affected community. No words can describe what they are going through right now. We must ensure that they receive all the support they need,” he said.

Trollhattan is an industrial town in west Sweden, located around 75km (50 miles) north of Gothenburg, the nation’s second largest city.