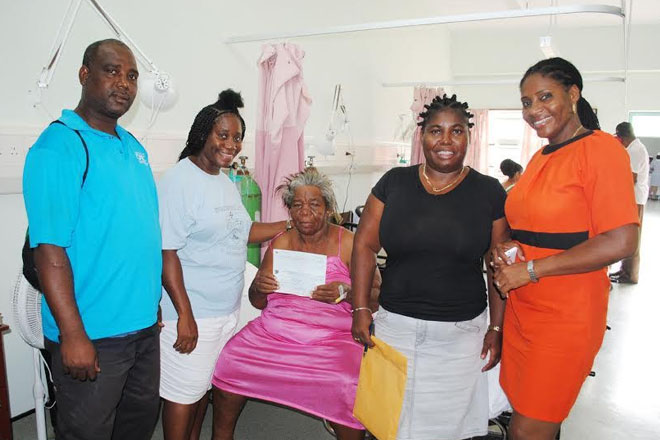 Basseterre, St. Kitts — Those who can’t come to us, we will go to them.

It was the case of a promise made and a promise kept when two Sugar Workers Restoration Fund (SWRF) Officers traversed the island of St. Kitts Thursday October 8th to deliver gratuity payment cheques to former sugar workers who could not travel to Basseterre.

The officers, Ms Thyra Gumbs and Ms Diana Duncan, started off in Old Road, moved drove on to Sandy Point, Newton Ground, Dieppe Bay, Molineux, Cayon, and ended the noble errand at the JNF General Hospital where one of the claimants is currently warded.

As much as those former sugar workers had varying degrees of impairment, two things stood out: They still remembered the years they worked in the sugar industry; and that they heard over the radio or TV that the new Team Unity Government had sourced funds to pay gratuity to aggrieved former sugar workers and that was the reason they made arrangements for their relatives to apply for them.

Two or three were not in a position to talk for themselves. It is their relatives/caretakers who said that after they heard about the EC$16 million grant Prime Minister the Hon Dr Timothy Harris had sourced from the Bolivarian Republic of Venezuela, they made the necessary arrangements to apply on behalf of their relatives.

According to SWRF Officer Ms Thyra Gumbs, a few cheques would have been delivered by SWRF clerks to the homes of persons who would have called the office to say that they were not in a position to travel to Basseterre, and to a number at the Cardin Home and the Molineux Hospital.

“But there are persons who are less fortunate and cannot have that done,” said Ms Gumbs. “We decided we will today step out and deal with those who are amputated, blind, or senile, as it is difficult for them to come out of their beds. So we decided that today will be the day for that situation.”

Mrs Winfred Paul, who is from Sandy Point, had worked on different sugar estates since 1958 at age 17.

“It was hard working for a dollar a day, from 7 a.m. to 4 p.m.,” said Mrs Paul. “So when I work five days, five dollars. We used to weed, drop soda and head water – put a bucket of water on your head and take it to the cutters. I was still working when it closed. I was working with the loader, they paid me but they did not pay me sufficient.”

Mrs Paul said that she heard about the new pay-out because everyone was talking about it. She completed the application forms at the Farms Community Centre when officials from the Sugar Workers Restoration Fund came to hold a town hall meeting to educate the public.

Like all those who had applied, she learnt that she had qualified but she could not come to Basseterre to collect the cheque as she had taken ill and warded at the JNF General Hospital. She was in the company of her daughter Ms Cecile Burt and son-in-law Mr Colville Francis when the cheque was handed over to her by her bedside.

“I am very thankful because they have given my mother more money for her toil in the sugar lands,” said Ms Cecile Burt. “I know how hard it was as I used to help her to head the water.”

Nevis-born 83 year-old Mrs Hyacinth Herbert who lives in Water Works, Cayon, said she started working in Brighton Estate in 1969 and never missed a day of work until 2004. When the industry was closed in 2005, she was paid a gratuity of EC$1,500.

“I listen that,” she said pointing at her TV set when she was asked how she got to know that there was going to be another pay-out. “I heard the news, and you know news spreads like fire.”

Mrs Delores Thomas of Race Course Housing Development in Newton Ground was born in 1939. She worked in the Cranston Estate for many years but left before the sugar industry closed. Her two granddaughters have vowed to offer her home-based care instead of taking her to a home.

“I used to work Best Buy, and after my mother took sick I quit the job and I went and asked for the job at the Newton Ground Primary School where my mother used to work, and so I still go there,” said Ms Janelle Thomas. She and her sister Ms Jewel Thomas were looking after their mother and grandmother, but their mother died of stroke. “I heard about the pay-out on the radio and my uncle went for the forms.”

In Sandy Point, Ms Pearline Woodley was present when the two SWRF Officers visited her bedridden former sugar worker mother, Mrs Winfred Woodley. She said that her mother suffered two strokes, and observed that she applied for her to get the gratuity money after she heard the information on the radio.

Mr Calito Ottley, 70, of Newton Ground was assisted by his sons, Mr Tex Richards and Mr Casville Jeffers to make the applications, while Mrs Bernice Francis-Broadbelt, 84 of Gibbons Dieppe Bay, had her son Mr Livingstone Francis applying for her after he would have heard the information through radio.

Yes, they toiled hard when they were strong. Though they are down now, they have received their fair share.