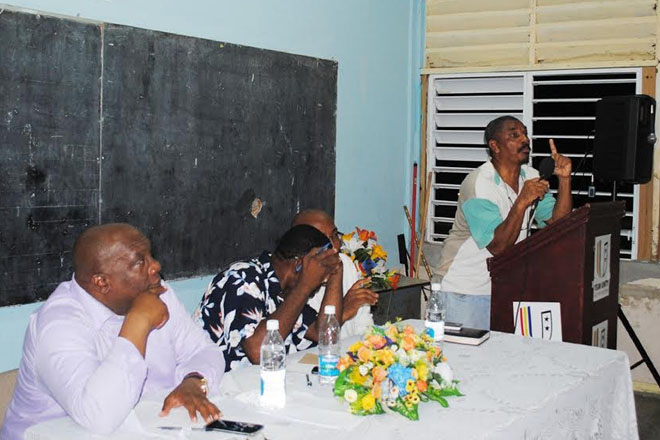 Basseterre, St. Kitts — The Sugar Workers Restoration Fund (SWRF) Secretariat is readying itself to disburse cheques to persons who are claiming on behalf of deceased relatives who toiled for many years working in the sugar industry.

They will be required to present letters of probate, and where the deceased had not left a will letters of administration. According to Mr Osbert DeSuza, who is the SWRF Chairman, it is not the intention of the fund’s committee or the government to put claimants to pay any expenses, stating that those documents will be obtained at no expense.

“We have close to 500 applications that are on behalf of deceased persons,” said Mr DeSuza. “We are dealing with government money and are running a proper government operation. If you are claiming on behalf of a deceased person and we have had several experiences at the SWRF Secretariat, you have to provide the evidence that you are entitled to the monies.”

Mr DeSuza made the remarks Sunday night (October 4th) at a town hall meeting called by the Prime Minister the Hon Dr Timothy Harris, which was held at the Edgar T. Morris Primary School in Tabernacle. He said that for such money to be paid, the SWRF Secretariat has to be satisfied that the person claiming is the one the deceased individual wanted them to receive the money.

“In that case you have to produce a letter of probate and if the person did not make a will, you have to provide what we call a letter of administration,” said Mr DeSuza who is also the Permanent Secretary in the Office of the Prime Minister.

“Don’t panic yet, because it is not the intention of the committee or the government to put you to any legal expenses. We will be providing that support to you and the document needed can be obtained at no expense. We have engaged the Legal Department, and Legal Aid to provide some support to us in that respect.”

One such claimant who will benefit from this gesture by the government is Mrs Rosetta Merchant whose husband died in June after he would filled out the forms for him to be properly compensated for the years he worked in the sugar industry.

Her husband, Mr Milton Merchant, had worked under very difficult conditions and when he died, doctors who had attended to him asked her if he used to smoke. She said ‘no’ and wanted to know why they asked her that question.

“They told me that his lungs were full of soot,” said Mrs Rosetta Merchant during an interview held on Wednesday September 23rd outside the Sugar Workers Restoration Fund on South Independence Square in Basseterre. “I told them that he did not smoke, but used to burn cane in Buckley’s Estate.”

Mrs Merchant, 69, was one of the thousands of persons who had turned out to welcome the President of the Bolivarian Republic of Venezuela, HE Nicolás Maduro, who was in the Federation at the invitation of the Federation’s Prime Minister, the Hon Dr Timothy Harris, to give out gratuity cheques to former sugar workers.

“My husband who was 82 years old when he died, had worked in the sugar industry at Buckley’s Estate cutting and burning cane for a period of 56 years,” explained Mrs Merchant. “When the industry closed in 2005, all he was paid was a mere EC$1,500.”

According to Mrs Merchant, when Prime Minister the Hon Dr Timothy Harris announced that he had sourced the funds to pay the aggrieved former sugar workers, her husband heeded the advice that had been given to the former sugar workers and he went to the Sugar Industry Restoration Fund (SWRF) where he filled out the necessary claim forms.

“We came and collected a form, we filled it up, and he signed,” said Mrs Merchant. “Shortly after that he died in June. Well, I called here, they told me I must come back in and fill out another form and they said that I have to walk with the death certificate, his birth paper, and my marriage certificate.

“My daughter was there. They asked me if there is anybody there to challenge my claim on behalf of my husband, and my daughter said no. She said she is the only one and that she would not challenge me, telling them that I am the wife and I was entitled to the benefits.”

Asked what her feelings were after Prime Minister Harris would have secured the money to pay the aggrieved former sugar workers, she said: “God bless our Prime Minister Dr Harris because it is good that he brought up the suggestion for the sugar workers to get their money. My husband’s case will get a proper closure.”

Mr Reginald George, the Manager of the Sugar Workers Restoration Fund Secretariat, on Friday October 2nd confirmed that he knew of Mrs Merchant’s case and that she would benefit from the legal services that will be provided. He said that the office will call all persons claiming on behalf of deceased relatives and once the lawyers look at the documents presented they would then decide what else is needed before any claim is paid.