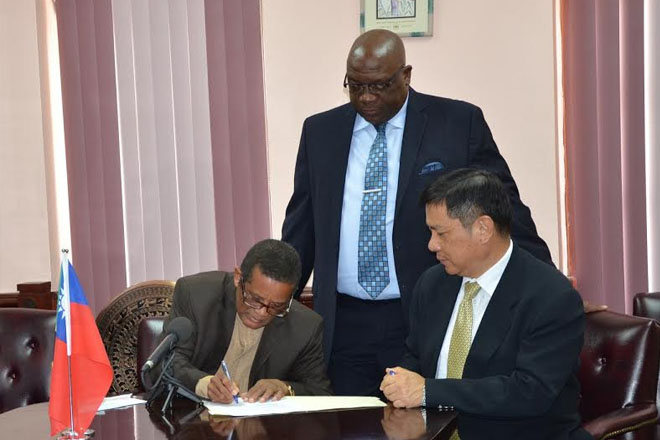 (ZIZ News) — The Government of the Republic of China, Taiwan presented the Team Unity-led Government with a cheque that will go towards purchasing six vehicles to be used by the Office of the Prime Minister, the Ministry of Foreign Affairs and the Ministry of National Security.

Prime Minister, Dr. the Hon. Timothy Harris, during the brief handing over ceremony, expressed gratitude to the Government and People of the Republic of China, Taiwan for the contribution.

“I want to record the government’s appreciation to the ongoing support and extensive cooperation that we have been experiencing between our two countries since we established diplomatic relationships in September of 1983,” he said adding that “On this account, as we have done on a previous occasion this year, your government recognising the security challenges that experience at this time is making a further support to the issues of national security.”

Prime Minister Harris said that police and law enforcement make heavy demands in terms of the need for transportation on an ongoing basis.

“The efficiency and efficacy of their work relates, in large measure, to the availability of reliable transport. The other provision which you have made support to the Office of the Prime Minister, to the Ministry of National Security, these are of course welcomed as we welcome all assistance,” he said.

“We can see in the past several months the Team Unity Government has done its best job to deter the criminals and to help the security of this country,” he said.

Permanent Secretary in the Ministry of National Security, Osmond Petty, received the cheque on behalf of the Government of St. Kitts and Nevis.

Also present at the handing over ceremony was the Cabinet Secretary, Josephine Huggins.