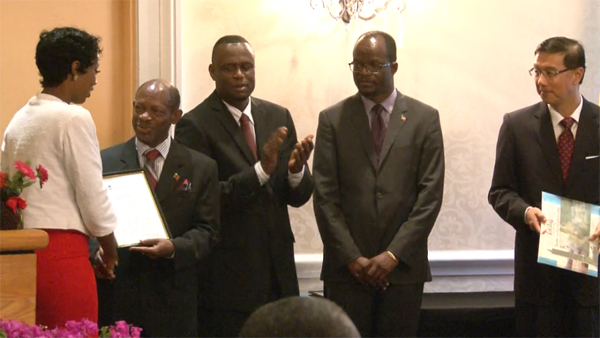 Basseterre, St. Kitts, (SKNIS) — Fifteen persons were awarded scholarships on Wednesday (July 09) marking an unprecedented number of Republic of China (Taiwan) scholarships to be given at any one time for St. Kitts and Nevis.

In years past, the maximum number of persons to receive scholarships was six.

The 15 students will be travelling to Taiwan for the upcoming academic year to join other students currently engaging in studies there.

Resident Ambassador of the Republic of China (Taiwan) His Excellency Miguel Tsao revealed that the number would not have been possible without the collaboration between the two Governments.

“This is a record breaking number, a new high in education cooperation in our two countries,” His Excellency stated. “…The new high number of awardees reflects our joint efforts of the two Governments and people.”

Hon. Nigel Carty, Minister of Education and Information noted that his Ministry has been working hard with external parties especially the ROC (Taiwan) to provide academic opportunities.

“We want to thank the Ambassador so very much for responding to our request for extending more opportunities for our young people. And so today we have not five or six, we have 15 of you who are going off to Taiwan.”

Minister of Foreign Affairs Hon. Patrice Nisbett also noted the high number of awardees and commended the ROC (Taiwan) for their firm support.

“Since the establishment of diplomatic relations between St. Kitts and Nevis and the Republic of China (Taiwan) over thirty years ago, the Government of Taiwan has demonstrated keen and unwavering commitment to the social and economic development of the Federation,” he stated.

Prime Minister the Rt. Hon. Dr. Denzil Douglas explained that the Government sees the importance of education and thus makes provisions for persons to further their studies.

“Education is, if not the most, one of the most important vehicles through which our country will move forward,” the Prime Minister stated. “It is the vehicle through which our people will move from one stage of development social, economic and political development to another. …That is why your Government sought scholarships and opportunities for you all over the world. Not only within the confines of the Caribbean, in the University of the West Indies, but we have said that there is no country, there is no boundary, there is no geographical location that you can never be because you have the ability and you have the capacity to succeed.”

The students will be pursuing Bachelors and Masters programmes in various disciplines including counselling and clinical psychology, civil engineering, environmental biology and fisheries science, medicine as well as computer science and information engineering.

The ICDF provides each scholarship recipient a full scholarship including return airfare, housing, tuition and credit fees, insurance, textbook cost and a monthly allowance. The MOFA students will undergo one year of Mandarin Chinese, then, like the ICDF colleagues pursue their four or five year programme.