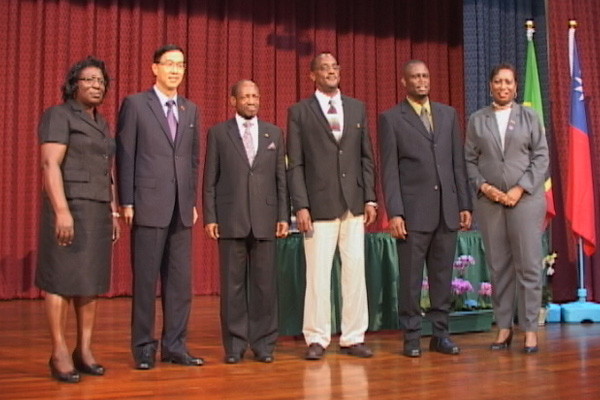 (SKNIS) ‘A double celebration’ were some of the words used to describe a recent gathering to signify the Republic of China (ROC) (Taiwan’s) investment in the education of the Federation of St. Kitts and Nevis.

In a ceremony held on October 16 at the Sir Cecil Jacobs Auditorium of the Eastern Caribbean Central Bank, Permanent Secretary in the Ministry of Education and Information Ionie Liburd-Willett said the day’s assembling was important for two reasons – to celebrate the Republic of China (Taiwan’s) contribution through its annual Taiwanese Human Resource Development Award and to witness the exchange of notes between the government of the ROC and the government of St. Kitts and Nevis.

Minister of Education the Hon. Nigel Carty in his remarks commended St. Kitts and Nevis’ Prime Minister the Right Hon. Dr Denzil Douglas for his ongoing personal commitment to education in the Federation and made specific references to the One-to-One laptop programme, Schools’ Infrastructural Development and Memoranda of Understanding signed recently between the government of St. Kitts and Nevis and various universities in the United States.

“The Prime Minister, I believe has been involved in every recent significant development in education at the personal level,” said Minister Carty. “You would recall for example, that the Laptop Programme for our teachers and students originated with the Prime Minister. He has made and was able to deliver on that commitment, and that I believe has taken education forward in a big way.” We also are very grateful to him for his involvement in the many issues which arose recently in regards to school infrastructure,” said Minister Carty, “he was there on the spot to provide advice and to make sure that the funds were provided without any obstruction whatsoever.”

He extended heartfelt gratitude to the ROC’s resident Ambassador to St. Kitts and Nevis His Excellency Mr. Miguel Tsao for his and Taiwan’s unending involvement with education in the federation.

“I also want to greet His Excellency Ambassador Tsao and I extend sincere gratitude to you Ambassador, for your active role and for making this continuous scholarship scheme a reality,” said the Education Minister, “You deserve our people’s very highest commendation.” “Just a few weeks ago, His Excellency the Ambassador presented a cheque in the amount of one hundred thousand U.S. dollars for human resource development to our ministry.

Sir we want to thank you very much for this donation which is of paramount significance as it will be used by students to assist them in their pursuit of quality education in the context of education for all,” said the Minister.

The Human Resource Development Programme will run from 2014 to 2018 and will take effect through the exchange of notes by both countries.

Recipients were encouraged to make the best use of the funds provided and urged to aspire to higher heights to make their friends, family, teachers and most of all, themselves proud of having done their very best.

Taiwan’s resident ambassador His Excellency Mr Miguel Tsao expressed pleasure in seeing the number of scholars now studying in Taiwan now rise to fourteen and was indeed happy that the government of Taiwan could contribute to the federation of St. Kitts and Nevis in such a meaningful way.