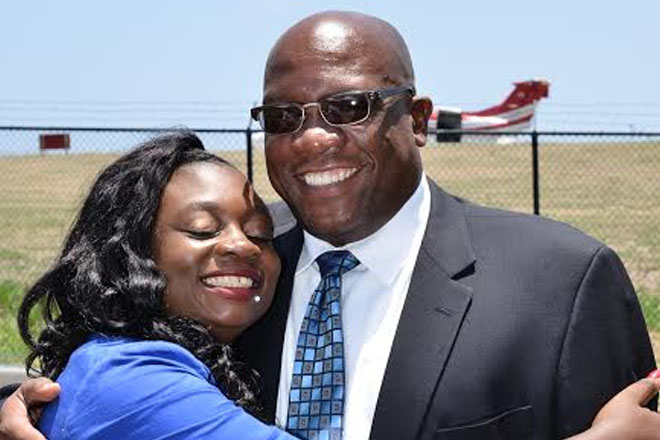 Basseterre, St. Kitts (SKNIS) — Eunella Henry of McKnight, St. Kitts is in Venezuela for medical treatment to dislodge a bullet in her leg after a shooting in July 2014

Reflection on the event, Ms. Henry said, “I got shot in that crazy shooting that they had at Frigate Bay at the Strip and now the bullet is still lodged in my leg. I’m travelling to Venezuela to see if anything can be done (to remove) the bullet.”

Ms. Henry’s treatment was facilitated by the Government of St. Kitts and Nevis after making a request to counterparts in Venezuela.

The best friend of Ms. Henry, Kadina Saunders accompanied her on the medical mission. Saunders thanked Prime Minister Dr. the Hon.Timothy Harris and the Venezuelan Government for helping her friend get the treatment.

“We went to the Prime Minister and asked for his help and without any hesitation he reached out and made his contacts and that is why we are here today,” she said.

Prime Minster Harris said when he was informed of Ms. Herny’s situation, he knew he had to intervene on her behalf and on that of other victims of violent crimes who may need medical help. He thanked the Government of Venezuela for its willingness to assist Eunella Henry.

“When I learned that she still continues to suffer pain, sometimes very aggravating pain as a result of the shots that had been fired, I thought that we had to look at a way to assist her and in the future assist other innocent victims of crime,” Prime Minister Harris said. “And so, I brought that specific incident to the Government of Venezuela and I want to thank them for that. This is a project that we could readily attend to under the vision of providing healthcare for the people in the Americas.”

Resident Ambassador for the Bolivarian Republic of Venezuela, His Excellency Romulo Camilo Henriquez Gonzalez said “First of all she (Eunella) was very lucky to survive this injury and we were happy to help her with love and hope that she will be in good condition after treatment.” He further stated, “This case was possible because of the good relationship between our two countries and it has always been a policy of our government to help those in need, and in this case especially, a woman. We did it with more love.”

Ms. Henry is expected to return to the federation on Saturday.