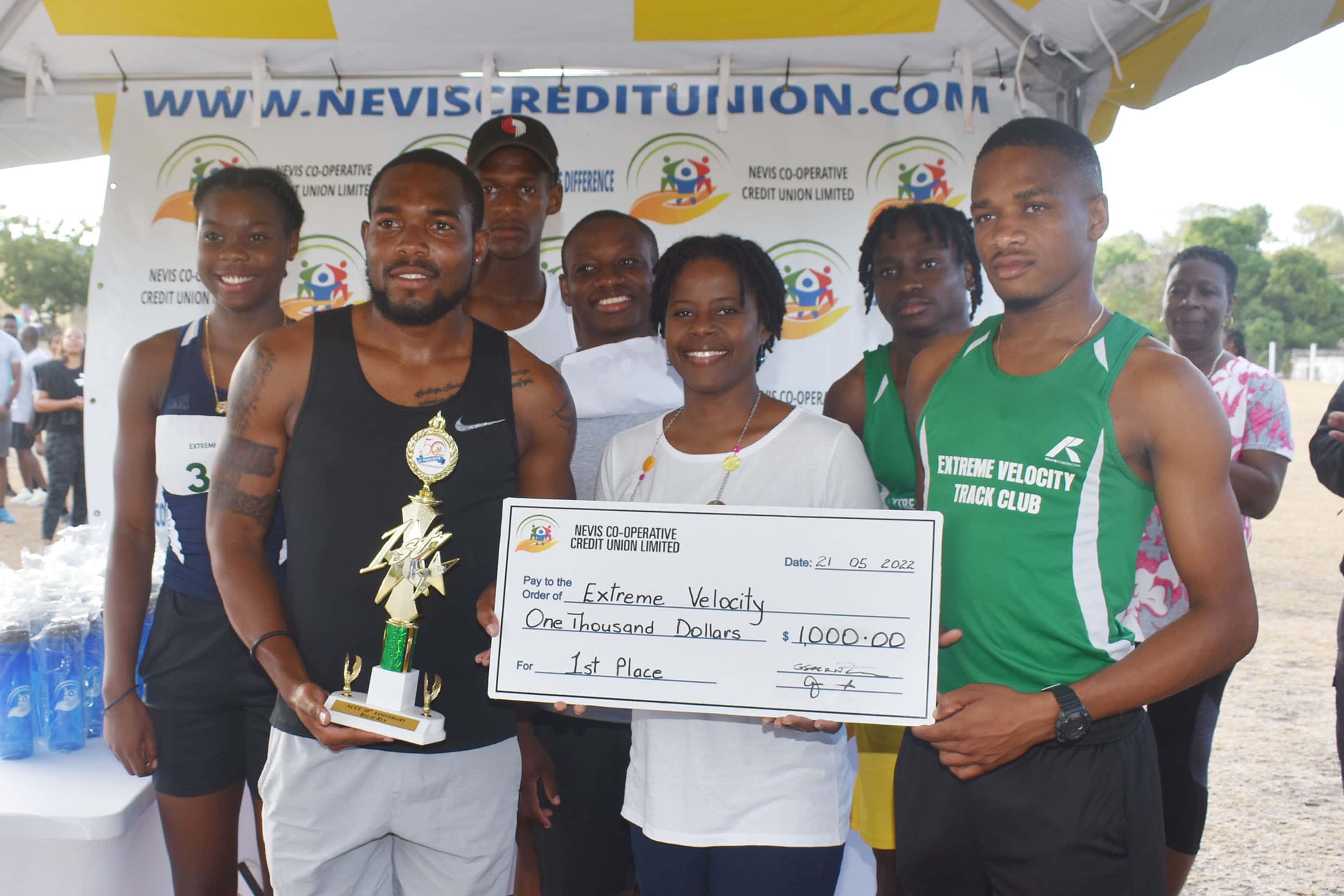 Charlestown, Nevis, May 23, 2022 (MMS-SKN) — Twelve teams assembled at the Vance Amory International Airport Saturday morning May 21 for the Nevis Co-operative Credit Union (NCCU) Limited’s 50th Anniversary Relay Run, which was won by Extreme Velocity with a time of 38 minutes and 43 seconds.

The Relay Run which had six stations along the route ended at the Villa Grounds in Charlestown where the winning team won a cash prize of EC$1,000 and a trophy presented by President of the Nevis Co-operative Credit Union Limited, Mrs Vernesia Walters.

So exciting was the Relay Run that President Mrs Walters proposed that it becomes an annual event noting that “we could probably get some more sponsors on board and we can give away some bigger prizes. So you have enough time to get fit and exercise and train and get yourselves ready for 2023 Nevis Co-operative Credit Union Relay Run.”

Among those present at the finishing point included the Premier of Nevis, the Hon Mark Brantley, Junior Minister of Education in the Nevis Island Administration, the Hon Troy Liburd, and Permanent Secretary in the Ministry of Health and Gender Affairs, Mrs Shelisa Martin-Clarke.

The first batch of runners took off from the Vance Amory International Airport at 6:00 a.m. after they would have been addressed by Mr Sydney Newton, General Manager of the Nevis Co-operative Credit Union Limited, who also prayed for them.

Extreme Velocity runners led all the way, with their anchor leg runner Ms T’Anna Liburd starting off very strongly. However, as she ran the finals stages through the streets of Charlestown she started losing steam and was seen being encouraged by her team members who ran alongside her to the finish point at the Villa Grounds.

Before the prize-giving ceremony, all the participants were taken through a cool-down session by a well-known fitness trainer, Mr Masefield Nisbett.

The Nevis Co-operative Credit Union Limited, the oldest Credit Union in the Federation of St. Kitts and Nevis was registered on July 25, 1972. It is observing year-long anniversary celebrations under the theme ‘Consistency, financial Security & serving the community: 50 years of development and prosperity.

A 50th Anniversary Relay Run Subcommittee was put in place under the chairmanship of Mr Kenroy Warner, NCCU’s Information and Communication Technology Officer. Along with his committee members, they worked hard to ensure that the event was the success it was, a fact that was acknowledged by the NCCU President Mrs Vernesia Walters, Chairman of the 50th Anniversary Celebrations Committee, and NCCU Vice President, Mr Carl Tyson.

Other members of the Relay Run Subcommittee are Secretary, Ms Tamara Johnson who is the Administrative Assistant Administration & HR; PRO, Ms Jaedee Caines who is the Business Development and Marketing Officer; Assistant Secretary, Ms Jahniel Nisbett who is a Credit Service Clerk; and members Mr Trevor Gill, the Information and Communication Technology Manager, and Mr Thorne Browne who is a Junior Operations Officer.

Chairman of the 50th Anniversary Relay Run, Mr Kenroy Warner acknowledged organisations and persons who would have contributed to the smooth execution of the event including Red Cross, Nevis Chapter; Nevis Health Promotion Unit; Nevis Police Division; Department of Sports-Nevis; and Ministry of Social Development. 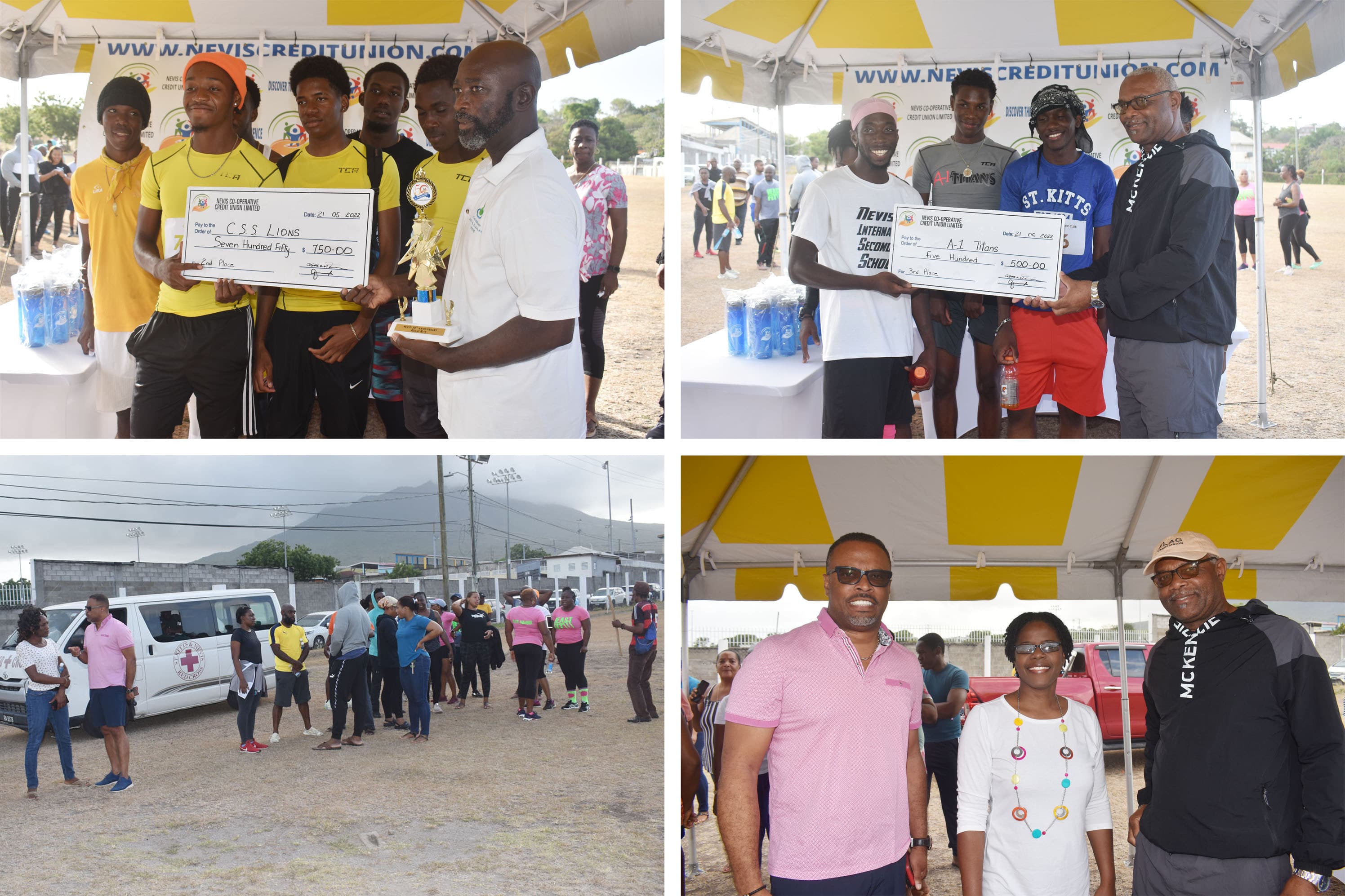