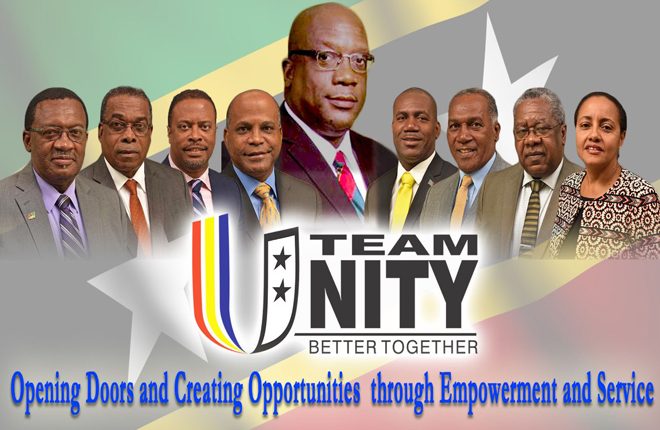 (Press Unit in the Office of the Prime Minister) – The Team Unity Administration will once again demonstrate its sincerest appreciation to the people of St. Kitts and Nevis for placing their trust in the tripartite government by hosting a week filled with wholesome and empowering activities.

The week-long celebration of the Team Unity Administration’s third anniversary of being elected to office features activities and events, such as church services and a health and career fair, which are specifically designed to engage every member of society.

The anniversary week of activities runs from Wednesday 14 to Sunday 25 February under the theme, “Opening Doors and Creating Opportunities through Service and Empowerment.”

The week commences with an address to the nation by Prime Minister and Chairman of the Team Unity Cabinet, Dr. the Honourable Timothy Harris on Wednesday 14.

Thursday, February 15, will see the official opening of the refurbished National Information and Communication Technology (ICT) Centre located at the C.A. Paul Southwell Industrial Park, starting at 9am. The refurbishment of the ICT Centre was made possible, in part, by the kind contribution of the Government of the Republic of China (Taiwan).

Then on Saturday 17, a call is being made for every resident and citizen to lend a helping hand by simply engaging in some form of activity that will positively impact their communities or the country in general. This is being done as part of the first edition of the National Volunteer Day where persons, groups and organizations are urged to help clean their communities, plant a tree, or spend time caring for the elderly and the more vulnerable in society.

This day will also be highlighted by a special National Volunteer Luncheon for the elderly at Government House from 11am to 2pm. There, dozens of deserving elders will be personally served lunch by members of the Team Unity Cabinet.

Cabinet ministers, high-level Government officials, as well as well-wishers will then gather at the Shiloh Baptist Church in Ramsbury, Charlestown, Nevis, on Sunday, February 18, for the first of two church services.

Then on Monday 19, ministers from St. Kitts will journey to Nevis where they will meet their colleagues for a special Cabinet Meeting at the Four Seasons Resort.

Tuesday 20th there will be the official renaming of the Mental Health Day Treatment Centre located at Lime Kiln Commercial Development. Later that evening, there will be a public town hall meeting at the Newtown Community Centre from 7:30pm.

Parliamentarians will then return to the Honourable House for a sitting of the National Assembly on Wednesday, February 21. That evening, a panel discussion looking at the journey of the Team Unity Movement will be carried live on ZIZ television and radio.

Residents and citizens will be given the opportunity to dialogue directly with Cabinet members, when on Thursday, February 22, parliamentary representatives and government officials will conduct constituency walkthroughs and hold one-on-one consultations in each constituency in St. Kitts and Nevis.

The launch of the National Health Insurance Implementation Commission will take place on Friday, 23 at 9:30 a.m. at the St. Kitts Marriott Resort. Also on that day, a National College, Health and Career Fair will be hosted in the Independence Square from 10am-5pm. The fair will be immediately followed by a 2-hour “Live Positive” concert featuring performances by Infamus, Dejour, Rucas and Hell Fire Sounds from 5-7pm.

The week of activities culminate on Sunday, February 25, with two uplifting activities. At 10am, Cabinet ministers and other government officials will join the regular congregation of the Calvary Baptist Tabernacle at Romney Ground, Sandy Point, for worship.

Then from 7pm to midnight, all are invited to Greenlands for the SMILE AGAIN Gospel Concert featuring PAPA San out of Jamaica, Bond of Love, Jewel Wattley, Allison Dore and many more.