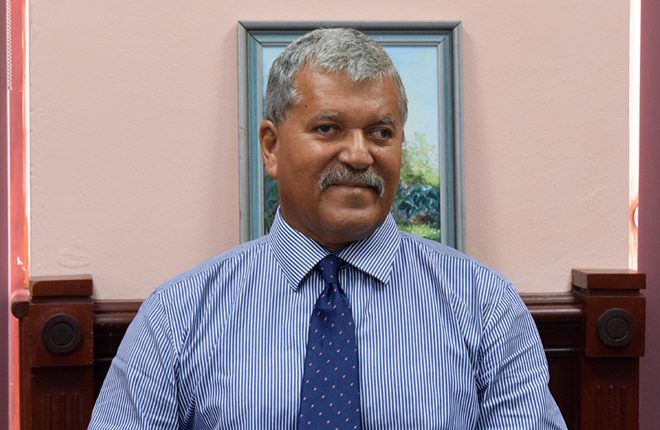 (Press Unit in the Office of the Prime Minister) – The Dr. the Honourable Timothy Harris-led Team Unity Government’s approach to creating and fostering an investor friendly environment in St. Kitts and Nevis came in for high praise on Tuesday (August 29) when the Prime Minister met with the Board of Directors of the St. Kitts-Nevis-Anguilla National Bank Limited.

Outgoing Chairman of the National Bank Board of Directors, Mr. Howard McEachrane stated in an interview with the Press Unit in the Office of the Prime Minister that despite the challenge of a small economic space, St. Kitts and Nevis continues to do well maintaining investor confidence.

“St. Kitts and Nevis has a small economy. It is part of the OECS which is also in total small economies of about 600,000 people, however, the infrastructure here is very good—physical and financial—for investment, so there remains a lot of investor confidence,” McEachrane stated.

The National Bank Chairman said similar sentiments have been expressed by foreign investors who have visited the twin island Federation.

“There are a lot of people who come from other territories, other countries and they are surprised by what they find here,” Mr. McEachrane stated. “The people are intelligent and very knowledgeable on local, regional and world affairs and the infrastructure is good. People are amazed when they see the roads, sporting facilities [and] the hospital here.”

The renowned businessman, who previously worked with the TDC Group of Companies, further commended the Team Unity Government for stimulating economic growth by investing in the development of the small and medium sized business sector, through its innovative Fresh Start Programme.

He added, “I think the Government is doing the right thing in trying to stimulate new enterprises…If you have an idea, go out and try to let your idea bear fruit. Also, local banks like ourselves are ready and willing to partner with all of them but in a controlled and secured manner.”

The St. Kitts-Nevis-Anguilla National Bank Limited announced this year that it had contracted with Development Bank to be involved in the Government’s Fresh Start Programme

At the start of April 2017, the Fresh Start Programme had already approved over 600 loans valued at $50 million, with $34 million of that amount already being disbursed.

Mr. McEachrane demitted his post as Chairman of the Board of Directors of the St. Kitts-Nevis-Anguilla National Bank Limited today, August 31, 2017, while Mr. Theodore Hobson QC is expected to step down from his post as Director at the end of September, 2017.

Prime Minister, Dr. the Honourable Timothy Harris thanked both men for their dedicated and meritorious service in their respective roles on the bank’s Board of Directors.