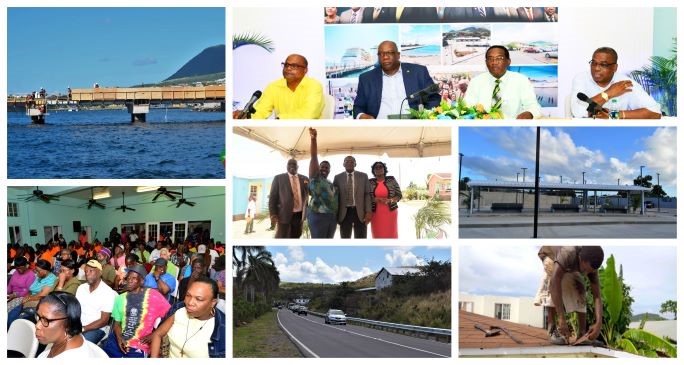 Team Unity Government’s record of delivery to the people of St. Kitts and Nevis unmatched

BASSETERRE, St. Kitts, March 13, 2019 (Press Unit in the Office of the Prime Minister) – In a little over four years in office, the Dr. the Honourable Timothy Harris-led Team Unity Government has delivered on almost all of the programmes and policies promised in its Manifesto leading up to the 2015 General Elections – programmes and policies that have uplifted and enhanced the lives of citizens and residents and transformed both the economic and physical infrastructure of St. Kitts and Nevis.

That was the overarching message delivered on Tuesday (March 12) evening at the Cayon Community Centre when the Government hosted the second in its series of town hall-styled meetings dubbed “Community Consultations.” The meetings are being held under the theme, “Making Dreams a Reality in Every Community!”

Parliamentary Representative for Constituency Four, the Honourable Lindsay Grant, told the hundreds of persons in attendance at last night’s meeting, as well as those listening via radio, and viewing online and on television, that if they were to examine the Team Unity Manifesto they would see for themselves the number of areas in which the Government has delivered.

“Almost every single thing in that manifesto we said that we would deliver, we have delivered on and more,” Minister Grant said to a round of applause from an appreciative audience.

Prime Minister Dr. the Honourable Timothy Harris hastened to add that, “No other government in living memory of St. Kitts and Nevis has performed the way the Team Unity administration has performed,” with a stellar record in public infrastructure development, social assistance for those in need and financial management.

“That is why we were able to start the most massive road resurfacing programme in the last 20 years,” Prime Minister Harris said, referring to the $69-million Island Main Road Rehabilitation Project.

The contract signing ceremony for entities who will be carrying out work under phase two of the project, which will see the resurfacing of the remainder of the island’s main road, takes place on Thursday, March 14 at Cunningham Estate, Cayon.

The honourable prime minister went even further and stated that where the former Denzil Douglas administration had failed to deliver, his Team Unity-led Government has and continues to excel.

“In 2004 in their manifesto, they [the former St. Kitts-Nevis Labour Party administration] promised that by January 2005 they would have started a second cruise pier…it never happened,” Prime Minister Harris said, adding, “It’s happening now under your Team Unity Government.”

The stellar achievements of the Team Unity administration were further validated by several nationals who used last night’s consultation to record their appreciation for the work of the Government in transforming the twin island Federation.