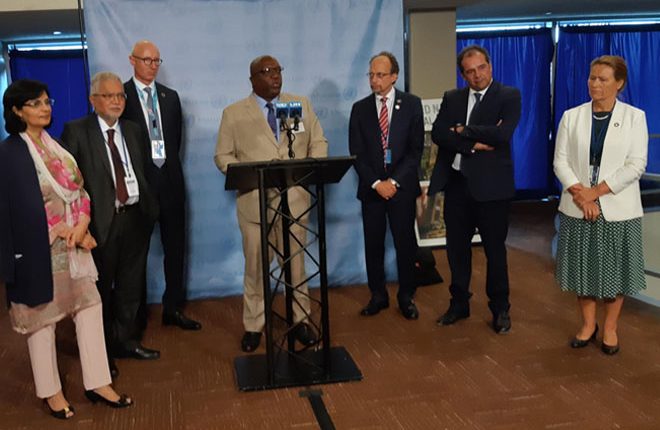 Made up of the People’s Action Movement (PAM), the Concerned Citizens Movement (CCM), and the People’s Labour Party (PLP), the Team Unity coalition was launched on September 26th 2013.

In an address to commemorate the anniversary, Deputy Prime Minister Hon. Shawn Richards thanked the people of St. Kitts and Nevis for giving Team Unity their support on February 16th 2015. He pledged their continued commitment to serving the people.

Minister Richards reflected on the accomplishments of Team Unity since taking office, stating that the vision of the movement to advance the country and its people remains as it was 5 years ago.

The Deputy Prime Minister said Team Unity “will not let up on serving and empowering the federation’s citizens and residents.” He ended by thanking his Team Unity colleagues for “staying the course and doing the hard work that the people of St. Kitts and Nevis needed to be done”.

The Prime Minister of St. Kitts and Nevis, Dr. The Honourable Timothy Harris, used his presentation at the launch of the defeat- NCD partnership initiative at the United Nations headquarters on Monday (September 24) to draw the International Community’s Attention to the inseparable link between climate change and the increased incidences of non-communicable diseases.

Addressing a joint media briefing on non-communicable diseases following the defeat-NCD partnership launch, Prime Minister Harris stated that climate change is a major hindrance on the Caribbean Region’s economies which also “undermines our ability to live up to the financing obligations that are required if we are to defeat NCDs.”

“Climate Change with its implications for agriculture and fisheries undermines our food security and in fact therefore deny our population access to cheap food, affordable food and plant-based food, and in that regard we have as part of our staple diet in the
Region an overabundance of salty, fatty foods, which needs to be replaced,” Dr. Harris indicated.

The St. Kitts and Nevis Prime Minister said the matter of climate change and its inextricable link to NCDs will be discussed at length when the Pan American Health Organization (PAHO), jointly with the World Health Organization (WHO), convene the Caribbean meeting of the geographically dispersed 3rd Global Conference on health and climate change, with a special focus on Small Island Developing states (SIDs).

That meeting, scheduled to take place in St. George’s, Grenada, from October 16-17, 2018, will be attended by Ministers of Health, Ministers of Environment, partner agencies, and stakeholders from Caribbean SIDs, who will discuss and identify actions and indicators for an action plan on health and climate change to be implemented In the Caribbean.

Dr. Harris continued, “climate change impacts negatively on our own ability to move forward—to advance our development agenda, and like the question of NCDs, they are reflections of the symptoms of the failure in the development paradigm, and so for all of these things to be successfully addressed we think that we need a new world order of cooperation and development among the world entities.”

In light of this, Prime Minister Harris encouraged all relevant parties to support the objectives of the defeat-NCD partnership, which seeks to help tackle this significant global health problem.

The partnership was launched on the margins of the 73rd session of the UN General Assembly. Its initial focus will be on diabetes and hypertension, with expansion to other NCDs in due course.

“We look forward to scaling up all of our activities at national capacity building, at financing, at creating better efficiencies and effectiveness in the marketplace so that this important sustainable development goal can be delivered,” said Dr. The Honourable Timothy Harris.