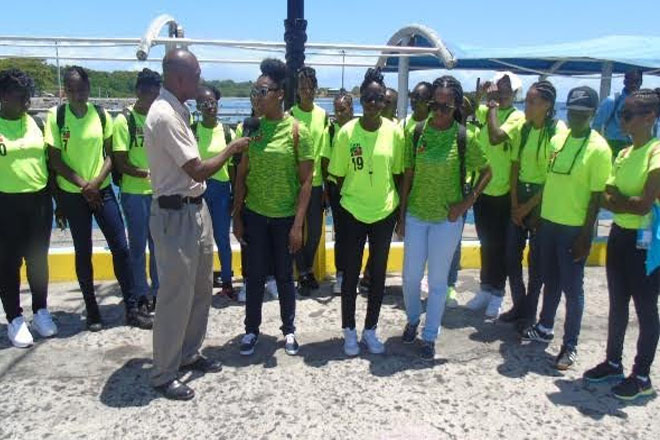 Sports Page — The St. Kitts-Nevis under 17 Football squad arrived at the Charlestown pier at about 1.50 pm on Wednesday 19th August.

The local team arrived ahead of the other teams which will be competing in the under 17 women’s group three qualifiers, which will be hosted at the ET Willet Park from August 22nd to August 26th.

Manager Greatess Gordan indicated that the team has been preparing for months and is now ready to do the federation proud. She advised the viewing public to come out and witness the games.

Assistant coach, Jaheida Lewis, indicated that certain team plans and on field strategies have been worked out, which she would not mention. She however challenged the members of the viewing public to come out and witness the matches and promised that her girls were very much up to the task.

Captain Kavisha Robin was bubbling with confidence. She is very much assured that her team will win the round of matches and urged the local supporters to come out in their numbers to witness the matches and to encourage the local team.

Meanwhile, members of the Dominica and Trinidad and Tobago teams arrived at the Charlestown pier at 4.45 pm.

They were officially met and warmly welcomed to Nevis by Junior Minister of Sports Hon. Hazel Brandy –Williams and Asst. Permanent Secretary, Miss D. Michelle Liburd, along with members of the LOC.

Officials of both teams expressed confidence that they had come to Nevis to win the tournament and invited the local football fans to come out in their numbers to witness what they termed ‘a good show.’

The tournament is set to commence on Saturday 22nd August with the following scheduled matches: