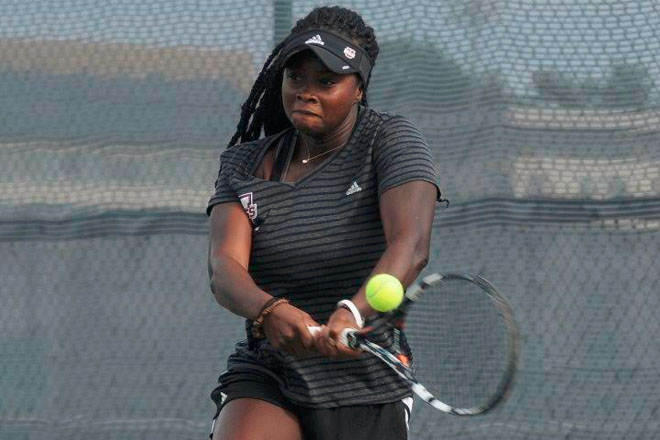 Tennis has strong start to season at Brown Invitational

Providence, R.I. — The UMass women’s tennis team saw its first action of the season at the Brown Invitational this past weekend. From Friday, Sept. 25th to Sunday, Sept. 27th, the Minutewomen took on competitors from schools including Rutgers, Harvard, Boston University, St. John’s, Brown, and Stony Brook.

Both doubles teams played strong for UMass continuing the success they had last season. In flight one of doubles play, senior Carol Benito (New Delhi, India) and sophomore Ana Yrazusta (Las Palmas, Spain) had a big 8-4 win in the semifinals against Harvard’s Nikki Kallenberg and Amy He. In the Championship match they suffered a close 5-8 loss against Harvard’s Amanda Lin and Annika Ringblom.

Making her first collegiate appearance, freshman Ruth Crawford (Atlanta, Ga.) was able to make a run in the consolation bracket eventually going on to win the final by defeating Nadia Smergut from Stony Brook 6-2, 7-6. For the weekend, she posted a 2-1 record in singles play.

Benito had a commanding win over Lee from Rutgers in the 7th place game of the singles draw winning the first two sets, 6-0, 6-2. Moreno was also able to come up with a 7th place finish in the maroon draw over Rutger’s Mariam Zein, defeating her 6-4, 7-5.

Junior Aarzoo Malik (New Delhi, India) was able to make a run in the main red draw advancing all the way to the third place game after defeating Madison Craft from Boston University in three sets, 6-1, 3-6, 5-2.

In the black draw Griffin kept winning, finding herself in the Consolation Final, where she was able to win the first set and blanked Brown’s Nandu Mandalap in the second set, 6-3, 6-0.

It was a strong start to the young season for the UMass Minutewomen, who will next compete vs. UConn on Thursday, Oct. 1 at the Mullins Center Courts in Amherst, Mass.