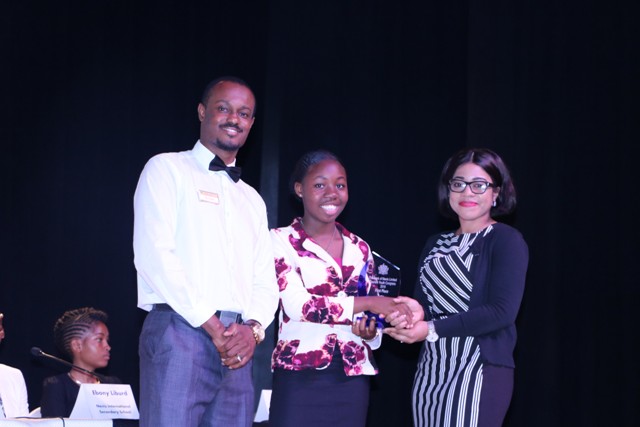 Charlestown, Nevis, May 23, 2019 (NIA): Ms. Brianne Chapman a student of the Charlestown Secondary School (CSS) is the new Youth Junior Minister of Tourism on Nevis. She won the title at the keenly contested The Bank of Nevis sponsored Tourism Youth Congress 2019, at the Nevis Performing Arts Centre (NEPAC) on May 21, 2019. The win is the second consecutive year for CSS.

Moments after she was presented with the winning trophy by Ms. Oksana Williams, Tourism Youth Congress Coordinator in the Ministry of Tourism, Ms. Chapman thanked those who made her win possible.

Ms. Chapman will form part of a team representing Nevis at the 2019 Caribbean Tourism Youth Congress later this year, during the Caribbean Tourism Organization’s annual State of the Industry Tourism Conference (SOTIC) in St. Vincent and the Grenadines.

The other winners were Ms. Donella Thompson also of CSS who placed second and Ms. Sharinque Reid of the Nevis International Secondary School who placed third.

The other school participating in the competition was the Gingerland Secondary School.