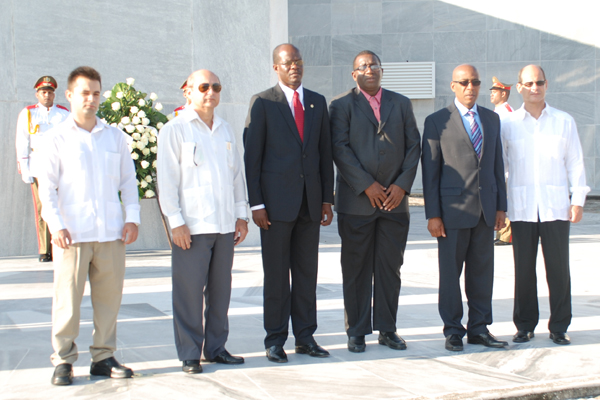 The delegation visiting the Republic of Cuba

Cuba — A delegation from the Government of St. Kitts and Nevis is visiting The Republic of Cuba. The members of this delegation include Deputy Prime Minister, Honourable Dr. Earl Asim Martin, Foreign Minister, the Honourable Patrice Nisbett, and Permanent Secretary in the Ministry of Energy, Mr. Lenrick Lake. The delegation was invited to Cuba with a view of strengthening bilateral ties, and to seek further cooperation between the two Nations in areas such as health, energy, agriculture and trade and investment. The delegation, while in Cuba will visit Ministry of Energy and Mining, the Ministry of Foreign Trade and Foreign Investment, Ministry of Agriculture and the Center for Genetic Engineering and Biotechnology. The Minister of Energy Dr. The Honorable Earl Asim Martin in meeting with the Cuban Minister of Energy, His Excellency Mr. Alfredo Lopez Valdes, discussed areas related to renewable energy and particular attention was paid to wind energy, solar systems and energy generated from Biomass. Discussion also centered around energy saving techniques such the programme related to the replacement of incandescent bulb with CFC bulb and solar and LED lighting options. The Cuban Minister gave a commitment to provide St. Kitts and Nevis with a shipment of these types of lighting solutions.

Later that day, a meeting took place between the Cuban Minister of Foreign Trade and Foreign Investment, H.E. Mr. Antonio Carricarte Corona. A part of the deliberation was centered around a scientific breakthrough in Cuban medicine related to treatment of complication related to the treatment of diabetes. The Honourable Dr Martin sought the support of the Cuban official for a pilot project to be planned and implemented as soon as possible in the Federation of St. Kitts and Nevis. The former Minister of Health indicated that he would discuss these new developments on his return to St. Kitts and Nevis with the now Minister of Heath,, Hon Marcella Liburd.

The Minister then later made a courtesy call on the Cuban Minister of Agriculture, H.E. Gustavo Rodriguez Rollero at his offices in Havana. During the discussions matters related to the factors that contribute to a high food import bill in both countries were discussed in great detail. It was agreed that the present situation is unsustainable and both countries must work together to ensure food security for all of their people. The Cuban Minister expressed that stepsbr are being discussed to address these issues and Cuba has moved expeditiously to invest in organoponic farming. Minister Martin in applauding the efforts of the Ministry of Agriculture in Cuba requested technical assistance from the Cuban Minister for a similar venture to be developed in St. Kitts and Nevis. The Cuban Minister of Agriculture gave his commitment to provide the necessary human resource and technical assistance that will be required to established these types of farms throughout the Federation of St. Kitts and Nevis.