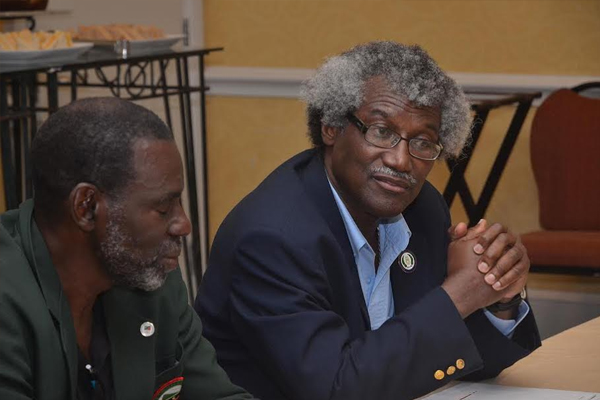 Basseterre, St. Kitts– In welcoming Sir K. Dwight Venner to the podium at the 2014 General Assembly of the Association of National Olympic Committees of the OECS (ANOCES), at the Marriott Hotel Resort and Casino, the Secretary-General of ANOCES and Master of Ceremonies at the occasion, Mr. Keith Joseph, referred to Sir Dwight as a “persistent promoter of regional integration, dating back to his earlier days at the University of the West Indies and his association with personalities like Messrs Lestrade, Rex Nettleford, etc.

In his presentation, Sir Dwight made the case for the seminal role of “sport and play” in the forging of “positive and lasting, personal community and national development, friendships and alliances.”

Sir Dwight – Governor of the Eastern Caribbean Central Bank (ECCB) drew from personal, youthful and adult experiences in sport, his years of tenure at the model financial and banking institution (one of the very few in the world), his encounters with sub-regional (OECS) Caribbean and International leadership (political, institutional, academic, sport) — to establish his settled view that sport has proven its capacity to enhance regional integration in an exceptional manner.

It was against that backdrop that Sir Dwight sought to encourage the ANOCES of the relevance and necessity of its existence and endeavours; and he further pledged the support of the ECCB to establish partnerships which ANOCES President Bridgewater has described as being “timely, sensible and strategic.”

Sir Dwight Venner is an example of what he preaches with respect to the relevance, importance, necessity and contribution of sports to institutional health. The ECCB is a signatory sponsor of the OECS-ECCB U-23 Netball Championships a project to which the SKNOC contributes significantly.

The ECCB stages its own annual Intra-Mural Athletic and Sports Competition and participates in the Biennial Caribbean Central Banks Sports Competition. Furthermore, currently serving as a distinguished Executive Member of the SKNOC is Mrs Jennifer Byron- Nero who is also serving as a member of the West Indies Cricket Board (WICB). Mrs Byron-Nero is the Managing Director of the ECCB. Mr Kevin Hope, also a staff member of the ECCB is the President of the St Kitts and Nevis Table Tennis Association (SKNTTA). Ms. Casey is also an Executive Member of the St. Kitts Netball Association.

On account of his stewardship, commitment, capacity and leadership, Mr Hope has been selected to serve as Team Manager of the Table Tennis Team that will be representing St Kitts and Nevis in the upcoming Commonwealth Games (23rd July – 3rd August) in Glasgow, Scotland.