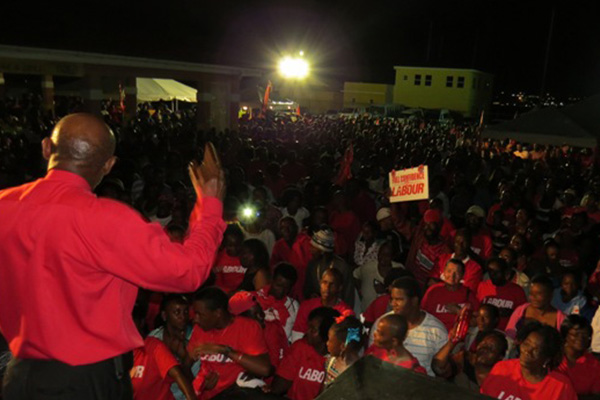 Thousands turned out Saturday night to support PM Douglas and his Labour Party, “Let them wait,” he tells massive crowd

Basseterre, St. Kitts, (CUOPM) — St. Kitts and Nevis’ Prime Minister the Rt. Hon. Dr. Denzil L. Douglas told a massive crowd of supporters on Saturday that his ruling St. Kitts-Nevis Labour Party (SKNLP) remains in charge and will not be rushed in calling general elections constitutionally due in January 2015.

In what was a carnival like or election fever atmosphere at Bottom’s Up, Port Zante, the National Political Leader told the cheering crowd, that despite challenges within the 82-year old party, it was stronger and ready to face the electorate in its bid for a fifth consecutive term in office.

He said the Party has selected candidates who are willing to serve the people.

“We have found people who will work for you.  Men, (who are) young, dynamic men, who have come about as a result of Labour’s Springtime, and are now ready to serve and work for you,” said Dr. Douglas.

And to the loud cheers of the massive crowd, he said: “I am not going to call no election until I know every single one of them is going to win.”

“We need to do much more work,” said Dr. Douglas.

He urged party supporters to rally with all of the Labour candidates, to register their children to vote and volunteer for the upcoming campaign. Asserting that his team of candidates was ready for the election, Dr. Douglas made it clear that Labour would call the shots.

“Comrades these men and lady are ready. They are ready.  But are you ready?  Are you ready?  You ready? You ready?”  With the crowd responding: “Yes, Yes, Yes,” an indication of their readinees to rumble, Dr. Douglas, who this year celebrates 25 years as a parliamentarian in the National Assembly said:

“We ready, we stronger, but we going make them wait!  Make them wait!  Burn them out!  Not in the wrong sense you know. We are ready and stronger, but they going make them wait, until Labour say, ‘we will call it.’  Because Labour must win!  Labour must win!  Because Labour is large, and is Labour in charge,” said Prime Minister Douglas, whose St. Kitts-Nevis Labour Party received 60 percent of the popular votes on St. Kitts, with 6 of the 8 seats on St. Kitts and 6 of the 11 Federal wise.

Although two of the Labour ministers crossed the floor following a dismissal and a resignation, the government still enjoys a legislative majority with seven on the opposition benches and eight on the government side.

The Red Out Rally and Party featured live music by the Nu-Vybes Band and Magic Fingers Ronnie Rascal.

There were on stage performances by Fantastic Thunder and Ayatollah, with popular West Basseterre candidate and former Calypso monarch, Mr. Konris Maynard woowing the crowd with one of his best hits.